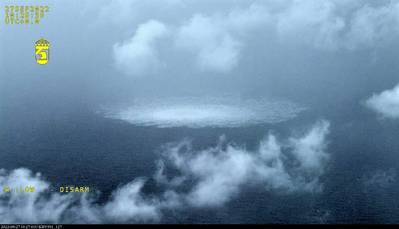 Damage to the Nord Stream gas pipeline from Russia to Europe was caused by powerful explosions, Danish police said on Tuesday, echoing earlier findings into leaks that erupted in the network under the Baltic Sea and that have been blamed on sabotage.

In what a Swedish newspaper described as the first publicly released footage of damage to the system, film from a private drone appeared to show a gaping rupture in one pipe. Expressen reported a 50-meter section missing from one area of pipeline.

Dwindling flows of gas from Russia, which once supplied 40% of Europe's needs, has left the European Union struggling to unite over how to respond to surging prices that have deepened a cost-of-living crisis for families and businesses.

The European Commission was expected to make proposals on Tuesday to develop a new EU benchmark price for liquefied natural gas (LNG) and kickstart joint gas purchases, amid divisions between countries over whether to cap gas prices.

European states, meanwhile, have raced to protect other energy infrastructure from Norwegian energy installations to German power lines after blaming the Nord Stream leaks on sabotage, but they have stopped short of saying who was behind the ruptures that were discovered on Sept. 26.

Danish power and gas grid operator Energinet said it had expedited inspections of its own pipelines in the wake of damage to Nord Stream 1 and 2 but said it found nothing abnormal.

Russia, which built the pipelines with foreign partners, also says the damage was caused by sabotage but has pointed at the United States and its allies.

Swedish and Danish authorities have been investigating four holes in the Nord Stream 1 and 2 pipelines. Denmark's findings appeared to be similar to those of Swedish prosecutors, who had earlier said two holes seemed to have been caused by blasts.

Sweden's daily Expressen reported that a section measuring at least 50 meters (164 feet) was missing from the ruptured Nord Stream 1 gas pipeline. Reuters could not independently verify that the images published by the paper were of Nord Stream 1.

Copenhagen police said "powerful explosions" caused the leaks, saying this was based on preliminary investigations.

"It is still too early to say anything about the framework under which the international cooperation with e.g. Sweden and Germany will run, as it depends on several factors," it said.

The EU was due to propose on Tuesday afternoon its latest response to an energy crunch that has prompted some European governments to draw up emergency plans that could mean rationing and blackouts this winter if supplies fall short.

The Commission is expected to propose that the EU design a "last resort measure" for a temporary "maximum dynamic price" on gas trades at the Title Transfer Facility (TTF) Dutch gas hub, which serves as a benchmark price for European gas trading.

Other EU gas trading hubs would be linked to this price through a "dynamic price corridor," according to a draft document, which could change before publication. The measure would not launch immediately but would require a separate EU proposal and approval from EU countries to go ahead.

The EU package is unlikely to placate all 27 EU countries, whose leaders will discuss the proposals at a summit on Oct. 20-21. Most EU countries have urged the Commission to urgently propose a gas price cap, but disagree on its design.

Germany, the EU's economic powerhouse, and other wealthier states have opposed gas price caps, which they say could hamper gas purchases and discourage energy savings.

The draft document also said EU energy regulators would be charged with developing a new LNG price benchmark by the end of March, while Brussels would launch a "tool" for EU countries to start jointly buying gas.

LNG imports by ship to Europe have surged as governments have raced to find alternative gas supplies around the globe, seeking to wean themselves off Russian deliveries.

QatarEnergy, a major global LNG supplier, said it was working to expand its gas production and trading as demand surges but said it would not divert LNG contracted with Asian buyers to Europe this winter.

Supplies via Nord Stream 1 had already been halted even before the leaks were found because of a dispute over Western sanctions imposed over Russia's invasion of Ukraine. Nord Stream 2 had not started commercial deliveries.

(Reuters - Reporting by Stine Jacobsen in Copenhagen, Kate Abnett and Gabriela Baczynska in Brussels and other Reuters correspondents; Writing by Edmund Blair; Editing by Bernadette Baum)