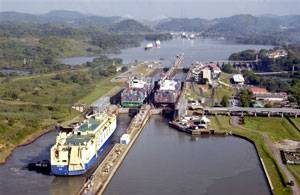 The Panama Canal Authority (ACP) released fourth quarter (Q4) operational metrics for fiscal year (FY) 2008. These metrics are based on operations from July through September 2008, the fourth quarter of the ACP's 2008 fiscal year and are compared with Q4 of FY 2007.

In Q4 of FY 2008, tonnage decreased minimally, but tanker and passenger transits and tonnage jumped significantly. During Q4 of FY 2008, Canal Waters Time (CWT), the average time it takes a vessel to transit the Canal (including waiting time for passage), decreased nearly 10 percent to 26.73 hours from 29.61 hours in Q4 of FY 2007. CWT for booked vessels (those ships holding reservations) also dropped from 17.63 hours in Q4 of FY 2007 to 17.56 hours. Steady operating efficiency accounted for the reduced CWT this quarter.