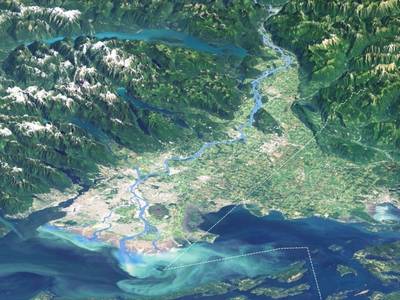 Aerial view of the port: Photo courtesy of Port Metro

Port Metro Vancouver, Canada's largest and most diverse port has released its 2013 mid-year cargo volume results that show strong growth of six per cent over the same period last year, including new records in key sectors and an exceptional 2013 cruise season.

Port Metro Vancouver is North America's largest export port by tonnage and trades $172 billion in goods annually with more than 160 trading economies, generating across Canada an estimated 100,000 jobs, $6.1 billion in wages, and $9.7 billion in GDP.

The mid-year cargo statistics are at: http://portmetrovancouver.com/docs/default-source/about-facts-stats/pmv_2013q2_stats.pdf?sfvrsn=2