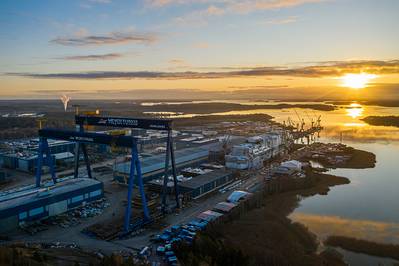 Finnish shipbuilder Meyer Turku on Tuesday started statutory talks to lay off up to 450 of its roughly 2,000 employees because of a hit to business from the coronavirus pandemic.

The Turku shipyard on Finland's west coast, which primarily builds cruise ships, had initially started talks over temporary layoffs, but said the market situation had now forced it to look for permanent cuts.

"These negotiations will include the permanent layoff of 450 people and another 900 are affected by other measures. These include temporary layoffs of different length, work time adjustments and other arrangements. All personnel groups and levels are part of the negotiations," the company said in a statement.

Instead of ramping-up from one to two large ships delivered per year until 2023, the assumption is now that the Turku yard will build just one large cruise ship per year, it added.

"The corona pandemic has changed the situation unexpectedly and totally. We are facing the fact that the corona-caused pause in cruising requires to stretch the order book," said Meyer Turku Chief Executive Jan Meyer.

At the onset of the coronavirus outbreak, Meyer Turku's order book included seven ships due for delivery through 2025. It said exact changes to the building and delivery times for these vessels are being negotiated with its customers.

The shipyard also published its 2019 financial figures, including losses that it said are mainly related to the delayed delivery of Costa Smeralda and reservations for the coming years.