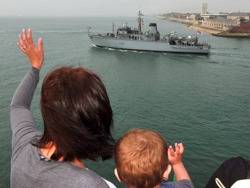 The two ships will join the UK task force based in the Gulf. Sandown Class HMS Shoreham left her home port of HM Naval Base Clyde, while Hunt Class HMS Atherstone left her home of Portsmouth.

En route the two ships will operate together in the Red Sea and Gulf of Aden, giving support to a multinational task force providing security in the troubled waters.

Sailing HMS Shoreham is the Faslane-based First Mine Countermeasures Squadron's Crew 4; 38 sailors who will see the vessel safely to her destination during the two-month voyage.
They are due to fly back to the UK at the end of the year, but the ship will remain in the Gulf for around three years, alternating crews.

The United Kingdom keeps a number of mine countermeasures vessels based in Bahrain, as the local environment allows them to perform key training in the warmer and more challenging waters found in the Gulf.

All Royal Navy vessels in the region also work in close partnership with regional navies in order to ensure maritime security and stability, so that commercial shipping and fishing take place in a safe environment.