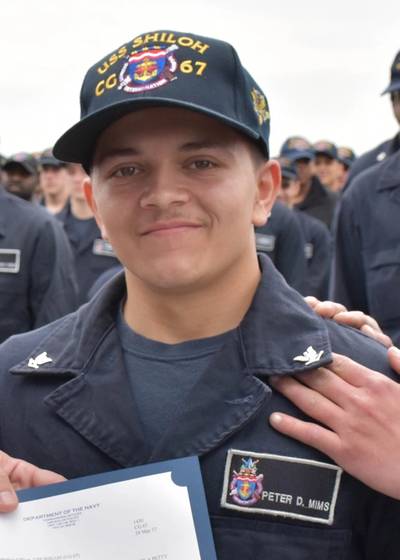 U.S. Navy Petty Officer Peter Mims, missing for a week and feared to have fallen overboard from USS Shiloh into the Philippine Sea, has been found alive aboard the ship. (U.S. Navy photo by Pat Morrissey)

A U.S. Navy sailor feared to have fallen overboard has been found alive aboard USS Shiloh (CG 67) a week after he went missing.

Gas Turbine Systems Technician (Mechanical) 3rd Class Peter Mims was reported missing June 8 and was presumed to have fallen overboard in the Philippine Sea, triggering a search involving U.S. Navy, Japan Maritime Self-Defense Force and Japan Coast Guard assets that lasted more than 50 hours and covered some 5,500 square miles.
The ocean search was suspended on June 11, but the ship’s crew continued to search on board the vessel.
On June 15 Mims was discovered alive on board the ship, reportedly having spent a week hidden inside one of Shiloh’s engine rooms, according to NavyTimes. He will be transferred to the USS Ronald Reagan (CVN 76) for a medical evaluation.
"We are thankful to have found our missing shipmate and appreciate all the hard work of our sailors and Japanese partners in searching for him," said Rear Adm. Charles Williams, commander, Carrier Strike Group 5 and Task Force 70. "I am relieved that this sailor's family will not be joining the ranks of Gold Star Families that have sacrificed so much for our country."
The Navy said it is investigating the circumstances surrounding the disappearance.
Shiloh is on patrol in the U.S. 7th Fleet area of operations in support of security and stability in the Indo-Asia- Pacific region.