MITAGS Selected by US Navy for Firefighting and Damage Control Training 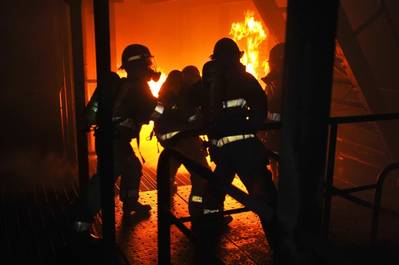 The Maritime Institute of Technology and Graduate Studies (MITAGS) has been selected by the U.S. Navy to provide mission critical firefighting and damage control training to Navy and Coast Guard sailors stationed in the Seattle, Washington area. Training standards require that all sailors must be prepared to combat fires or flooding at any time, whether at sea or in port. The Pacific Northwest is the only part of the world where the Navy contracts this type of training to a civilian fire school.

The MITAGS trainer, named the M/V Fire Dragon, was designed and built for the sole purpose of helping mariners practice the skills essential to controlling fire and managing flooding aboard ship. Live exercises take place in a number of interior compartments which replicate the conditions found aboard military vessels – engine rooms, pump rooms, galley, and living quarters.

In preparation for this new contract, the structure has benefitted from a number of technology and capacity upgrades. The Fire Dragon can now support scenarios that simultaneously combine multi-compartment fires along with ruptured pipes, holes in the hull, and weakened doors, hatches and bulkheads.

MITAGS’ Director of Business Development, Capt. Jon Kjaerulff, who is overseeing the implementation of the contract, says, “We are very excited for this opportunity to serve our Pacific Northwest Navy and Coast Guard service members, and provide quality training to help keep them safe.” Capt. Kjaerulff, himself a Navy veteran, emphasizes that many of the instructors teaching these programs have also served in the military. “It is our honor to serve the men and women who serve on the front lines of freedom,” he says.