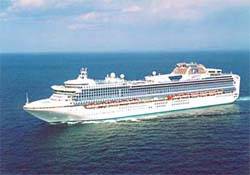 Mitsubishi Heavy Industries, Ltd. (MHI) announced the company has reached an agreement, and signed a memorandum of agreement (MoA), with Carnival Corporation & plc calling for the construction of two new 125,000-ton cruise ships for its AIDA Cruises brand. The ships will be the largest ever constructed for this cruise line. Delivery for these two 3,250 passenger ships is scheduled in March 2015 and March 2016. The MoA is subject to execution of definitive agreements, financing and other customary closing conditions. These two AIDA ships mark a return by Carnival Corporation & plc to Mitsubishi Heavy Industries which built two highly successful ships for Princess Cruises, both of which were delivered in 2004. Carnival Corporation & plc is the largest cruise vacation group in the world, with a portfolio of 10 cruise brands operating in North America, Europe, Australia and Asia, including Princess Cruises and AIDA Cruises. Together the group operates 101 ships with 10 new ships scheduled to be delivered between 2012 and 2016.

China Merchants Energy Shipping Co Ltd  says it inked a deal to order four ships worth up to $118.7 million.It has also agreed to sell three ships worth $15 million…