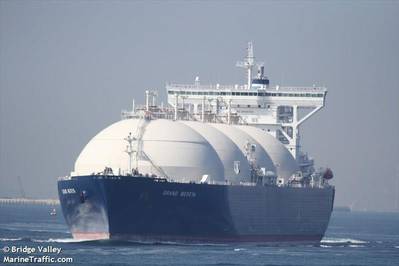 Russian President Vladimir Putin signed a decree in June taking charge of the LNG project, creating a new legal entity to deal with buyers and shareholders.

MOL's move comes after Japanese utilities, such as JERA and Tokyo Gas, signed deals with the new Russian operator to maintain long-term deliveries of LNG and Japanese trading houses Mitsui & Co and Mitsubishi Corp were approved by Russia to take a stake in the new operator.

MOL signed the contract with new operator Sakhalin Energy LLC on Tuesday through a subsidiary which is 60% owned by MOL, it said in a statement.

The vessel has been transporting LNG from the project under a long-term charter contract with Sakhalin Energy Investment Company Ltd, the former operator, and will continue the same services with the new operator, MOL said.

MOL said it complied with sanctions imposed by the international community - in a likely reference to Western measures against Russian over its invasion of Ukraine - and that it continued to consult with various parties, including the Japanese government and project partners.

Sakhalin-2 is one of the world's largest LNG projects, supplying about 4% of the global market.