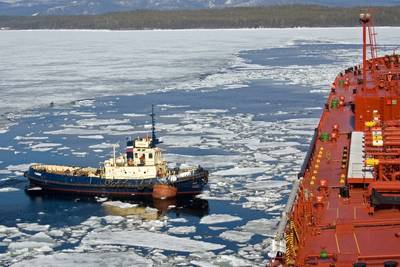 Russia is considering banning foreign vessels from shipping Russian energy cargoes via the Northern Sea Route, as well as from icebreaking and coastal navigation, the Kommersant newspaper reported on Tuesday citing a draft government resolution.

The step, proposed by the Industry and Trade Ministry, would restrict vessels built outside Russia on the Northern Sea Route that Moscow wants to become a major shipping lane as the Arctic warms at a faster rate than the rest of the world.

The ministry did not immediately respond to a request for comment.

Kommersant reported that the ministry on Nov. 1 drew up a draft list of activities that only Russian-built vessels would be able to undertake on the shipping lane.

The activities included transporting Russian-produced oil, gas, gas condensate, and coal along the route, as well as icebreaking services, hydrotechnical and underwater engineering work, it said.

The draft ban that could enter force on March 1 for most of the activities is opposed by some in government who fear Russian-made vessels and Russian shipyards might not be able to cope with a sudden switch, the paper said.

Russia hopes the shipping lane across its northern flank, which would shorten the distance between China and Europe, will begin year-round shipping in 2022 or 2023. (Reporting by Gleb Stolyarov; Writing by Tom Balmforth; editing by Jason Neely)