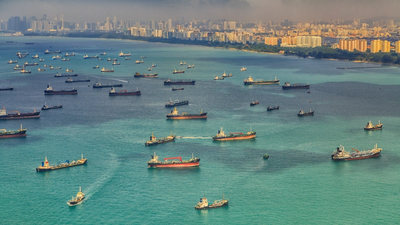 The company said an increasing number of ships were getting affected by the tainted bunker fuel after 34 vessels were identified to have received HSFO deliveries from two unnamed Singapore suppliers over the last two months that were contaminated with up to 2,000 parts per million (ppm) of chlorinated hydrocarbons.

"The impact has been failure of the fuel system to the auxiliary engine resulting in loss of power and propulsion creating a blackout," VPS said in a document seen by Reuters.

VPS and the Maritime and Port Authority of Singapore (MPA) did not respond to Reuters' requests for comments.

VPS said the delivered HSFO actually met the ISO 8217 specifications upon each delivery, but a deeper screening method identified the fuel contaminants.

The fuel contamination would likely have significant impact upon ship operators, in terms of costly damages and repairs, voyage delays and time-consuming claims, VPS added.

One shipowner in Asia, who declined to be named due to sensitivity of the matter, said the issue is going to hit scrubber-fitted vessels using HSFO bunkering in Singapore. Scrubbers are equipment used to reduce sulfur emissions.

Users of low-sulfur fuel oil are unaffected, he said.

"Using contaminated HSFO as a bunker fuel, a ship might have to end up at a nearby port to make arrangements, which would basically delay the voyage by a few days," a Singapore-based shipbroker said.