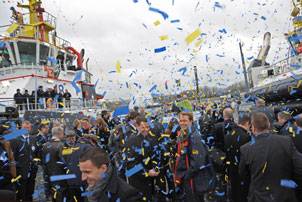 Towage and salvage specialist Multraship christened its two newest Azimuth stern-drive multipurpose tugs in a special ceremony at the Portaal van Vlaanderen in Terneuzen, the Netherlands, on February 4, 2011.

Joan Nuijten-Muller of Multraship performed the christening ceremony on Multratug 18, which was delivered in 2009 by the Vega Shipyard in Bandirma, Turkey. Multratug 18 is 117.1 ft loa, with a moulded beam of 37.7 ft, and is designed for a multi-role capability for harbour, escort and sea towage as well as fire-fighting and salvage roles. It is chiefly employed in a deep-sea role, but can be deployed as and when needed in the River Scheldt area.

Multratug 18 has FiFi 1 fire-fighting, salvage, escort towage and oil recovery notations, and is powered by two ABC diesel engines, which deliver 70 tons bollard pull.  It has a double drum winch aft and a single drum winch forward and a free running speed of 13.5 knots. It is classed by Italian classification society RINA and is registered under the Dutch flag.

Eline Muller of Multraship, meanwhile, christened Multratug 3, which was built in Vietnam by Damen Shipyards and delivered to Terneuzen in late December 2010. Multratug 3 will mainly operate for Antwerp Towage NV, a 50/50 joint venture between Multraship and Fairplay Towage, but will also be available for emergency response work, including fire-fighting, in the River Scheldt area.

With FiFi fire-fighting, a maximum bollard pull of 94.7 tonnes, an overall length of 106.2 ft, and a beam of 43.6 ft, the vessel is capable of a speed of 14.7 knots. It is classed by Lloyd’s Register and is registered under the Dutch flag. It is currently the strongest tug in the area.

Also on display at the christening ceremony was Multraship’s floating sheerlegs Cormorant, recently upgraded to 600 tonnes lifting capacity and with its new A-frame proudly in place.