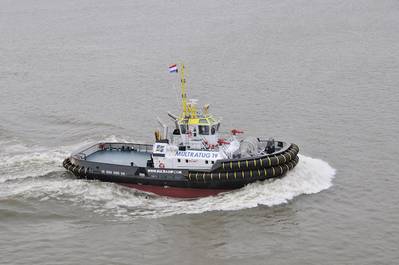 Towage and salvage specialist Multraship is to take delivery of a new design of ASD 3212 tug from the Galati, Romania yard of the Damen Shipyards Group.

The new ASD 3212 Multratug 19 has been built to a completely new design specification developed after a period of intensive research. Multraship’s specification called for a tug with minimum 80 tons bollard pull (BP), able to serve specific market segments. During its initial sea trials, Multratug 19 achieved over 83 tons BP and a speed of almost 15 knots. Final tests will be carried out in The Netherlands. The new design has been thoroughly researched over an extensive period, resulting in a tug that can perform to maximum efficiency in rough weather conditions.

Multratug 19 performed well in 3.5 m waves and is very suitable for escort services. Exhaustive research went into the design of the tug’s winch, which has been developed by Maaskant Shipyards Stellendam (part of the Damen Shipyards Group) and Bosch Rexroth, in co-operation with Lloyd’s Register.

Multratug 19 is the second vessel to be built by Damen for Multraship, following the 2010 delivery of the newbuilding ASD3213 tug, Multratug 3, built at Damen’s Vietnam yard.  Leendert Muller, Managing Director of Multraship, says, “This is an industry which requires ongoing investment in order to provide the level of expertise and service which our clients need and demand. This new order confirms Multraship’s commitment to investing in new tonnage, and new technology, and we are pleased to be working once again with Damen Shipyards, following our previous successful collaboration on Multratug 3.”

Damen delivered two ASD 3212 tugs earlier this year to an Australian coal terminal operator, and a further 85-ton BP vessel, a sister tug to Multratug 19, has been sold to Intertug S.A. (Colombia) for delivery in June 2012 from Damen Shipyards Galati in Romania.