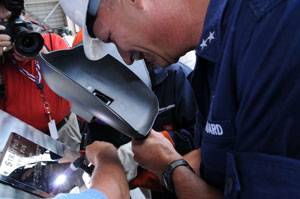 First lady Michelle Obama will serve as Stratton's sponsor.  This is the first time a first lady has ever sponsored a Coast Guard cutter.  As the sponsor the first lady will be involved in the life of the cutter.  This is Obama's first formal association with a United States Coast Guard cutter and serving as Stratton's sponsor is an extension of her commitment to supporting America's men and women in uniform and their families.

"I am honored to serve as sponsor of the Coast Guard Cutter Stratton, named after one of the most extraordinary women to serve our nation in uniform," said Obama.  "Every day, the United States Coast Guard keeps our families and communities safe at home and contributes to the defense of our nation overseas.  This vessel will embody the strength of today's military and the enduring courage of our Coast Guard's men and women."

"The keel laying is a significant event in our surface acquisition program," said Rear Adm. Ronald J. Rábago, the Coast Guard's assistant commandant for acquisition.  "We are especially proud and honored that this ship will be sponsored by the first lady.  We are all pleased and impressed with the dedication of the men and women of the Coast Guard's Gulf Coast Project Resident Office and of the Pascagoula shipyard.  Their commitment to excellence in producing the National Security Cutter class to meet the demands for Coast Guard missions is truly inspiring."

Each of the NSCs will be named for a Coast Guard "legend," including former commandants Adm. Ellsworth P. Bertholf and Adm. Russell Waesche, as well as Founding Father and first U.S. Secretary of the Treasury Alexander Hamilton.  Stratton is the namesake of Capt. Dorothy Stratton who directed the Coast Guard's Women's Reserve, or SPARs, during World War II.  Stratton was a professor and dean for women at Purdue University, Ind., and in 1942 she was the first woman accepted into the Coast Guard's Women's Reserve.  She and her colleagues helped the Coast Guard live up to its motto Semper Paratus, "Always Ready" by working to ensure the service was ready for front-line sea duty in America's war effort.  SPARs fulfilled many vital roles during the war and their efforts helped pave the way for women to serve throughout our Armed Forces.

The Coast Guard recently accepted the first NSC, Bertholf, which entered service following completion last year.  Northrop Grumman Shipbuilding's Gulf Coast shipyard in Pascagoula is under contract to build three NSCs including Waesche, which is approximately 90 percent complete, Stratton, which is more than 20 percent complete, and Hamilton, for which the Coast Guard has procured long lead time material.