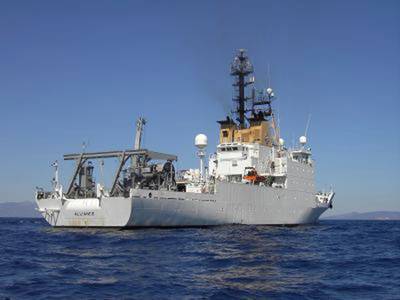 NATO’s 3,100-ton, 305-foot research vessel NRV Alliance has been a leading platform for underwater acoustics research to the benefit of NATO navies.  The ship operated with a civilian crew under the German flag for many years for the NATO SACLANT Center, later renamed the NATO Undersea Research Center, and now known as the NATO Center for Maritime Research and Experimentation.  Now Alliance flies a new flag, and has a broader mission.  What’s the status of Alliance?

Several years ago CMRE’s operating model was changed, taking us from NATO ACT (Allied Command Transformation) and placing us as part of the NATO STO (Science and Technology Organization) and we became customer-funded.  It was necessary to change the protocol that we used before with ACT and needed to look at other options for the flagging of Alliance.  We went through a protracted period of talking with the nations from about 2014 right up until the end of 2015, and the net result was that Italy offered to provide military flags for both Alliance and the smaller RV Leonardo, along with a military crew. That brings some synergy for where we are situated here in La Spezia.  Following that agreement, an MOU was formulated with the nations and with Italy, where the time at sea would be split. In compensation for Italy providing us with a military crew, they now get a portion of the sea time available on the ships, with the rest of the time available for NATO use.

Is that a good deal for Italy?

Italy didn’t have a platform like Alliance that they could use for national purposes until now.  They end up with about 90 days of use of Alliance each year.  So for the cost of a crew, it is a good partnership arrangement.

Who pays for the maintenance?

Ownership and custody was passed from ACT to CMRE in 2016, so we pay for everything. The only thing we don’t pay for is the crew’s salary. When we had Alliance crewed by civilian mariners our cost was about 2 million Euros a year.

Now that you are customer-funded, do you have enough business to support operations?

We have been fortunate.  We have expanded use of the ship for additional customers, and we’ve been successful with it, particularly with institutes and academia, most notably in the U.S., which now have access to this world-class platform.  I spend a proportion of my time meeting with the people from University-National Oceanographic Laboratory System (UNOLS), Office of Naval Research (ONR), National Oceanic and Atmospheric Administration (NOAA), and other people who go to sea on a regular basis but don’t necessarily have the platforms available that they would like.

So we’ve done a considerable amount of business with them.

That’s true, and we’re doing our best to keep her in good condition and operating. Based on the world geopolitical situation, and the growing interest in the academic science community, we had aspirations to get the ship back out to the North Atlantic, and the high north, and the Arctic, because the world is changing, and interest in the high north is growing. Not many people have a ship that is ice-capable to get up there, stay up there, and operate in those conditions. Alliance is built as an ice-class ship. We were approached by UNOLS and Dr. Bob Pickart of the physical oceanography department at Woods Hole Oceanographic Institution, who had for a number of years been attempting to get a suitable platform to go up to the Arctic in the January – February – March time frame to look for cold weather intrusions. Basically, they’re storm hunting.

What are cold weather intrusions?

That’s the interaction of the surface water and the air that forms very violent low pressure systems that develop into some of the major storms that we’ve seen.  It’s where some really nasty storms start.  And nobody’s been able to get up there in the winter to study it. So we were approached: could we do this cruise?  We then made the decision, and invested to get Alliance back to a polar standard; she hadn’t been that way for a number of years. We had to go back and re-establish some redundant systems on the ship, such as the steam heating and other polar precautions.  And we were able to do that cruise in 2018.

How did it go?
It went really well.  The ship performed superbly, and did an amazing job in some very challenging weather conditions.  The crew was fairly inexperienced to start with, but we put them through training, and they learned very quickly and became quite confident in operating in ice and other challenging conditions. So you could see their confidence grow throughout the cruise, and they achieved an awful lot. We had been up there in 2017 during summertime, before we had done all the ice enhancements.  And we went back up for the entire summer of 2018.   Really quite exciting stuff.  We did have a significant engineering casualty at the end of our last cruise, where one of the two main propulsion diesel generators failed and while we had redundancy it did have an impact on our work.

Now that you’ve regained this capability to operate in the Arctic, are you looking at more customers that want to go there?
Absolutely. Alliance used to be the quietest research ship, which was important for conducting research related to ASW.
Today we can say that we’re not just quiet – we’re ice capable.

Alliance is more than 30 years old.  What comes after Alliance?

We definitely have an aspiration to look at what our next research vessel will be.  I think in about 10 years’ time we’re going to be wanting to replace Alliance. She’s a great ship, but she won’t go on forever, and some of the compliance issues nowadays mean that she’s going to need replacing in about 10 years’ time.  We’re looking at a package of 150 million Euros to replace her.  It wouldn’t be a like-for-like, but still she will be a very capable platform for NATO.  We will want a quiet ship, but the noise monitoring and acoustic quieting has moved on exponentially since Alliance was built. So most research ships coming out now are quiet enough.

Are there ships out there today that meet those “aspirations?”

There are other very good ships out there.  The Norwegian’s brand new PC-3 class icebreaking research vessel Kronprins Haakon will be operating in both the Arctic and Antarctic.  It is an absolutely phenomenal vessel.

Nothing is as quiet as Alliance, but do we need her to be that super, super quiet? We may, because things change in the submarine world.  But we can also use autonomous offboard systems.  We’re not in the game of towing miles of towed arrays, which is what we used to do.  So I think it’s entirely possible to build a fully functional, quiet-enough platform to do that work. Alliance is fully ice capable, and that would be what I want for any replacement--because, really, it’s where we need to be, it’s where we need to operate. Our program next year, 70 percent of it is up in the Arctic.

I knew Alliance was a “global” classed ship, but I never thought that “global” meant “ice.”

It’s something that hasn’t been exercised for a long time.  We knew it was coming down the line, so we positioned ourselves to make sure that we were able to operate up there, and as a result, my phone often rings with people wanting to know if they can get up there with us.

Do you schedule your operations through UNOLS?

No, we don’t, but I maintain a direct link with the UNOLS executive secretary, and he’s on the scheduling committee, so whenever they have something coming up where they know they’re going to need an ice-capable ship, or they’re unable to meet it from the UNOLS pool, they’ll come to me.

Is it difficult to put another rider on your ship to conduct whatever experiment they want to do?

Not at all.  We always try to accommodate them.

And scheduling-wise, you have to accommodate the needs of the Italian Navy.

Do the Italian sailors look upon Alliance as good duty?

They love the variety of it, and they love the ship itself, but as far as sea time goes, they tend to spend more time away than they would normally.

Are they required to do the day-to-day maintenance?

So what’s your message to the research community? “Open For Business.”

That’s right.  We’re open for business. We’re out there and in the right part of the world, and they know the platform that we have to offer.  The more programs we can get out there, the better it is for all of us.

And how about your message to the NATO nations?

We need continued support. We are trying to increase our customer diversity, but there are costs we won’t be able to recover just by customer funding through our NATO Program of Work.  The customer funding model is not a be-all and end-all for research, so we need look at all options for the future.