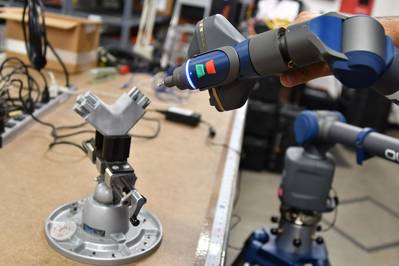 Using 3D scanners, Naval Surface Warfare Center Dahlgren Division scientists and engineers can provide the warfighter with critical information faster than ever before. Not only are the scanners efficient, but they are cost effective and extremely accurate. (U.S. Navy Photo/Released)

“We are trying to reduce not only our time to start a design, but we want to have a good design the first time. We want to eliminate any rework that would cost us time and money later in our program schedule,” said John Moser, Hardware and Metrology Engineer from Weapons Control and Integration, referring to the latest technological advance, using 3D scanning as a reverse engineering capability. Naval Surface Warfare Center Dahlgren Division has begun to use this process to provide the warfighter with resources faster and more accurately than ever before.

Using a 3D scanner to collect information allows for more accurate measurements of complex geometrical objects, the ability to quickly gather information and the ability to reference the scans at a later time. There are two different ways to scan the object: hand scanning and large volume scanning. Hand scanning obtains information from very small to medium-sized objects such as a small fragment to a car engine, while large scans can manage things like a building or a plane. These scanners are incredibly accurate, so much so that depending on the weather and other environmental conditions, they can pick up movements such as metal expanding in the heat and concrete moving.

3D scanning creates a bridge in the gap of accuracy when trying to provide service men and women with the tools and appliances needed to keep them safe in the field. When an object is scanned, a laser creates millions of points detailing the object. From those points and other scans from different angles and orientations, an accurate representation of the item, called a mesh, is created. Using different scans of the same object, engineers can cut out unneeded parts of the scan, like reflections or elements of what the object was sitting on.

3D scanning provides insightful solutions for quick evaluations concerning types of 3D printing parts needed to provide assistance to the warfighter. The accuracy of the scans allows the team of engineers and scientists to work faster and smarter while preventing problems down the road. Not only is this technology fast and efficient, but it’s also cost effective