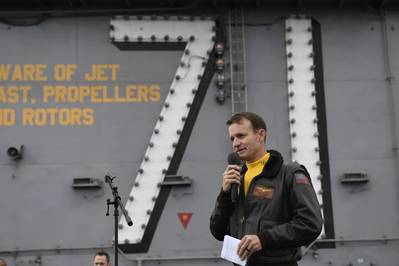 In an extraordinary reversal, the U.S. Navy has recommended reinstating the fired captain of the coronavirus-hit aircraft carrier Theodore Roosevelt, whose crew hailed him as their hero for risking his job to safeguard their lives, officials said on Friday.

The Navy’s leadership made the recommendation to reinstate Captain Brett Crozier to Defense Secretary Mark Esper on Friday, just three weeks after Crozier was relieved of command after the leak of a letter he wrote calling on the Navy for stronger measures to protect the crew, the officials said, speaking on condition of anonymity.

The Pentagon issued a statement acknowledging Esper received the results of the Navy’s preliminary inquiry into the Roosevelt incident. But it added that Esper wanted to review a written copy of the completed inquiry.

Suggesting no decision was imminent, the statement said Esper then “intends to thoroughly review the report and will meet again with Navy leadership to discuss next steps.” The Navy said in a statement “no final decisions have been made.”

“During this time of crisis, Captain Crozier is exactly what our Sailors need: a leader who inspires confidence,” he said.

A senior U.S. defense official, speaking on condition of anonymity, said Esper wanted to be sure that the final Navy report would stand up to public scrutiny before signing off and stressed that the Roosevelt outbreak inquiry went far beyond Crozier.

But Esper’s deliberations raised questions about whether political or other considerations might override the Navy’s recommendations in a case that has seen Democrats vocally critical of the Trump administration’s handling of the matter.

Sources say Crozier is one of the 856 sailors from the Roosevelt’s 4,800-member crew who have tested positive for the coronavirus, effectively taking one of the Navy’s most powerful ships out of operation.

Crozier was fired by the Navy’s top civilian, then-acting Navy Secretary Thomas Modly, against the recommendations of uniformed leaders, who suggested he wait for an investigation into the letter’s leak.

Modly’s decision backfired badly, as members of the crew hailed their captain as a hero in an emotional sendoff captured on video that went viral on social media.

Embarrassed, Modly then compounded his problems by flying out to the carrier to ridicule Crozier over the leak and question his character in a speech to the Roosevelt’s crew, which also leaked to the media. Modly then resigned.

News of the Navy’s recommendations could boost morale among sailors on the Roosevelt, who were caught between the Navy’s desire to keep the ship operational and its duty to shield them from unnecessary risk in peacetime.

“When you are in the military you sign away a lot of your choices and your (ability) to share your opinions about some things,” one sailor, speaking on the condition of anonymity, told Reuters.

“It is nice to see that us standing together for this (shows) that our voices matter.”

The disclosure of the Navy’s recommendation, which was first reported by the New York Times, came just hours after the Pentagon announced that at least 18 sailors aboard a U.S. Navy destroyer - the Kidd - had tested positive for the new coronavirus.

It was another blow to the military as it faces fallout over its handling of the Roosevelt, raising additional questions about whether the revamped safeguards in place to protect U.S. troops are sufficient.

The crisis being triggered by the coronavirus is the biggest facing Navy leadership since two crashes in the Asia Pacific region in 2017 that killed 17 sailors.

Those incidents raised questions about Navy training and the pace of operations, prompting a congressional hearing and the removal of a number of officers.

The U.S. Department of Transportation’s Maritime Administration (MARAD) said Tuesday it is accepting applications from eligible…