US Navy-owned Research Vessel Back in Action 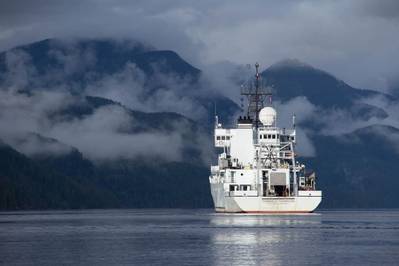 The Navy-owned vessel has been operated and maintained University of Washington since 1991, under a charter lease agreement with the Office of Naval Research (ONR)-which manages the ship on behalf of the service.

The $52 million refit, which was sponsored by ONR, the University of Washington and the National Science Foundation, extended the Thompson's life by another 15-20 years. By comparison, it would cost around $200 million to build a new research vessel.

"The refit of the R/V Thompson provides a continued global capability of support to Navy and national oceanographic research objectives," said Dr. Tom Drake, head of ONR's Ocean Battlespace Sensing Department. "It also enables additional years of service, hundreds of thousands of ocean miles sailed, research opportunities for thousands of scientists, and the training of the next generation of seagoing scientists and technicians."

During the mid-life refit-conducted in Seattle by Vigor Shipyard, the 274-foot Thompson was refurbished from stem to stern, throughout all five of its decks. It received new cleaner and more efficient diesel engines, the latest navigation and ship-positioning systems, as well as sophisticated sonar, allowing it to map the ocean floor in sharper detail and even differentiate between species of fish and other marine life.

Since finishing the refit earlier this year, the revamped Thompson has sailed to New Zealand and Taiwan-and will travel to India, Sri Lanka, the Philippines, South Africa and Australia in coming months. Research projects include using special floats to measure the ocean's temperature and salinity, mapping underwater mountains, and studying the heat flow generated by an aquatic volcano and hot springs.

"The R/V Thompson has performed very well since its refit, and the crew has provided positive feedback," said Douglas Russell, the University of Washington's manager of marine operations. "They especially appreciate things like the improved air conditioning and heating systems, water-making and sewage plants, and the new drainage system-things you don't think about until you're out at sea and really need them to work well."

Since the end of World War II, the Navy has provided research ships to select universities and oceanographic institutions to perform scientific studies of the marine environment. The Navy currently owns six of these vessels-part of the U.S. Academic Research Fleet, whose research at sea supports Navy and national oceanographic research objectives and trains the next generation of oceanographers.