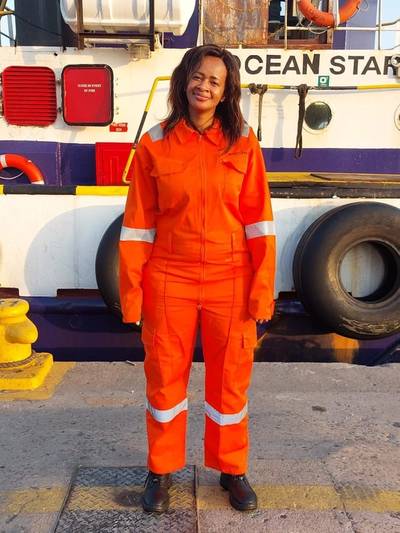 Maritime transport is the backbone of international trade and the global economy. Approximately 80% of global trade by volume and in excess of 70% of global trade by value is carried by sea, and millions of tons of goods are handled by ports worldwide according to the United Nations Conference on Trade and Development (UNCTAD).

South Africa is positioned on a major shipping route with an expansive coastline that traverses two oceans and spans nearly 4 000 kilometers. The country has a vibrant maritime sector that boasts eight commercial ports and 44 non-commercial harbors; approximately 30% of South Africa’s population lives around the seas.

In this thriving maritime industry that contributes substantially to our economy, structural and cultural barriers continue to perpetuate the status quo. Although no figures are available to quantify women’s participation in the South African maritime economy, the country is generally regarded as performing at a global average where women account for only 2% of the global maritime workforce, according to the International Maritime Organization (IMO).

Gender demographics show that the maritime industry continues to be male dominated. A survey titled: Lost in success: women’s maritime careers in Eastern and Southern Africa, conducted among women seafarers in East and Southern Africa by Meenaksi Bhirugnath-Bhookum and Momoko Kitada, found that women working on vessels often feel isolated, undermined and underappreciated. They have to work harder to receive the same level of recognition as their male counterparts.

The study further indicates that to be successful in their maritime careers, women managers tend to live a work-led life rather than one that is work-life balanced.

The report shows that opportunities for women in the formal economy have increased as a result of rapid industrialization in the regions. However, women are still expected to carry out the majority of domestic jobs associated with their traditional gender roles. The research concludes that the lack of a work-life balance model does not increase women managers’ agency within the “man-made” system of the maritime industry.

While there is an urgent need to transform the maritime industry and increase women’s participation in this increasingly vital sector, the industry should also take this opportunity to introspect, identify and address the underlying barriers that stifle women’s advancement in the sector. Some of the hurdles are pay-gap analysis, career progression, training and development, attitudes and perceptions of diversity, and inclusion policies and practices.

Achieving gender diversity in the maritime industry is not only the right thing to do, but it is a prerequisite that will unlock the potential of the sector and ensure that the objectives of Operation Phakisa are realized. Operation Phakisa sets out to ramp up contributions to the ocean economy to R177 million and in turn create one million jobs by 2033.

The reality is that these goals will not be achieved if women continue to be confined to the periphery in this sector and are denied the opportunity to play a meaningful role in contributing to its growth and development.

Women constitute half of South Africa’s working-age population. Depriving ourselves of their contribution is not only self-defeating, but will have far-reaching negative economic consequences. Attaining gender parity is an economic imperative and not a tick-the-box exercise for political correctness. An increasing body of research has found a direct correlation between diversity in the workplace and improved financial performance.

A Boston Consulting Group study found that companies with more diverse management teams have 19% higher revenues due to their innovation. This finding is significant, more so for industries where innovation is key to growth. The findings of the study demonstrate that that diversity is not just a metric we should pursue, but a key ingredient of a successful revenue-generating business.

The latest unemployment statistics released by StatsSA indicate that African women in particular are the worst affected by unemployment and poverty. Although the official unemployment rate decreased by 0.6 percentage points in the second quarter of 2022, StatsSA still shows that 47,0% of South African women were recorded as economically inactive. This means that almost half the working age women in South Africa are out of the labor force, compared to 35,6% of their male counterparts.

The maritime sector can be galvanized to mop up unemployment among this sector of the population, upskill young women in a variety of disciplines and kickstart the growth of the sector and the economy.

As one of the companies at the coalface of the maritime industry, Servest is cognizant of the abundant opportunities available in the ocean economy.

Servest provides a range of support services to the maritime sector, which ensure the smooth management of vessels at sea and in our harbors. These services include crew change, which entails sorting out immigration and making transport arrangements from the harbor to the airport for old and new crew. Other services include medical evacuation, arranging for technicians to undertake repairs or service on vessels at sea, assisting with onboarding of new crew and navigating language barrier issues, replenishing food and water supplies to ships at sea, and planning and doing recovery and clean-up operations.

The maritime industry can learn important lessons from other sectors of the economy as it navigates its way to achieve gender inclusivity. The sector needs to realize that gender inclusivity cannot happen overnight and requires buy-in and involvement at every level.

True diversity extends beyond just peppering the industry with a few employees from different backgrounds. Transformation needs to be supported by effective monitoring systems and processes. It also requires building a culture that ensures that the behaviors, attitudes and systems are aligned with the diversity ideals that are being espoused. The maritime sector has its work cut out for it to transform. The good thing is that the industry does not have to reinvent the wheel, because it has rich reference material from other industries to study from.