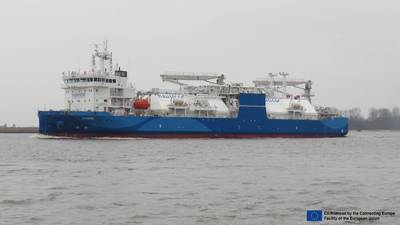 During the operation, 150 tons of LNG were bunkered from “Kairos” to “Ternsund” at the port’s oil terminal.

Åsa Boström, Controller at the Port of Södertälje, stated, “The first LNG bunker operation was a huge success and the cooperation between the terminal and port operators, the crews on board of the LNG bunker vessel and the receiving vessel went very well. Establishing alternative fuels in the port fits perfectly well into our overall strategy to minimize environmental impact and emissions. Supporting the development of solutions, which benefit both the business and the environment, is an investment into the future of our port.”

Not only was it the first LNG bunker operation in the port of Södertälje, but also the first one in the Baltic Sea while normal cargo was unloaded in parallel (SIMOPS).

Sonja Neßhöver, Director LNG Portfolio at Nauticor, highlighted the importance of this operation, “The first SIMOPS LNG bunker operation at an oil terminal in the Baltic Sea marks an important milestone for the development of the LNG supply infrastructure. We are happy to have been chosen by NEOT as partner for this operation and see a profound basis for future operations after such a successful first run.”

The bunker operation puts into practice the contract for the supply of LNG, which was signed by Nauticor, a leading supplier of LNG as marine fuel, and NEOT, a significant independent fuel supply company in the Baltic Sea region and an ambitious player on the global trading market.

The agreement covers the supply of LNG by ship to NEOT’s fleet of time-chartered product tankers running on the environmentally friendly fuel.