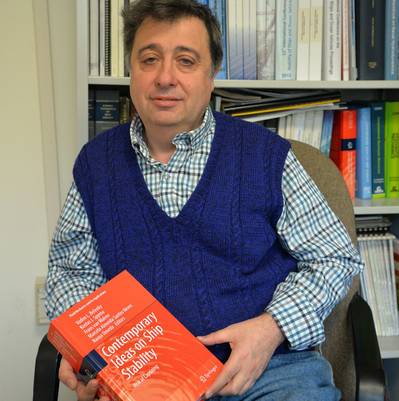 Dr. Vadim Belenky, a naval architect in the Simulations and Analysis Branch at Naval Surface Warfare Center, Carderock Division, holds a copy of Contemporary Ideas on Ship Stability: Risk of Capsizing on Jan. 23, 2019. The book is a compilation of papers from engineers, naval architects and professors from around the world, for which he was the editor in chief. (U.S. Navy photo by Kelley Stirling/Released)

To say this book is a collection of research would be an understatement. “Contemporary Ideas on Ship Stability: Risk of Capsizing” is more like a preservation of knowledge covering the last nine years.

Dr. Vadim Belenky, a naval architect in the Simulations and Analysis Branch at Naval Surface Warfare Center, Carderock Division, was the editor in chief for the book, the chapters of which are papers from engineers, naval architects and professors from around the world. Belenky himself co-authored four of the papers, along with 15 other current or former Carderock employees who authored these papers.

The abstract for chapter one says, “TEMPEST is designed to be computationally efficient to support real-time training simulators, as well as high-resolution evaluation of surface-ship, dynamic-stability performance across a wide range of possible environmental conditions. TEMPEST aims to improve the state of the art for real-time computations through the inclusion of nonlinear (body-exact) hydrodynamic perturbation forces and physics-based, viscosity-influenced lift and cross-flow drag forces.”

Reed, the Navy’s senior research scientist and technical consultant for high-speed ship hydrodynamics, said TEMPEST has been very important software in the field of dynamic stability research, and it was a multi-million-dollar investment for the U.S. Navy.

Reed said that having this chapter start the book just showcases the important contribution Carderock has to the world in the realm of fluid mechanics. He said basing stability assessments solely on previous experience doesn’t allow for novel, unconventional design.

“This book provides an avenue by which the international community concerned with the stability of ships can learn of and be informed about the work on ship stability that we here at Carderock have performed,” Reed said.

Belenky said that while the research in the book, much of it experimental in nature, was not published in peer-reviewed journals, it deserved to be preserved in the form of this book, which seeks to highlight contemporary research that results in products like TEMPEST.

Dr. Jack Price, Carderock’s director of research, said having this research in a one-volume piece of referable materials is very helpful to anybody in the field.

“It really is a compilation of the knowledge of the field as it is right now,” Price said.

He said that within the Navy, there’s a tendency to focus on the advanced engineering and engineering integration that Carderock does, without the understanding that there’s a lot of comprehensive research and foundational research done at Carderock that only Carderock can do.

“We are the only Navy entity that has this understanding and they (the Navy) rely upon us, even if they don’t realize they do, to maintain that research capability,” Price said. “Because if we didn’t do it, for the naval applications that we do, there wouldn’t be anybody in the world that could do that for us—anybody we would trust.”

While the book does include research from laboratories and universities worldwide, the Carderock contribution contains the necessary research specific to the Navy as the seaborne branch of the U.S. military.

Reed said the research presented in this book has been and is being used in support of several ship design efforts. The statistical methods are being used to provide quantitative metrics as to the bounds of Carderock’s seakeeping experimental results; the statistical-extrapolation methods are being used to develop operator guidance and safe-operating envelopes for use onboard ship; and the more fundamental techniques for assessing stability are being investigated for use to provide dynamic stability assessments during early stage design.
“It serves as a resource that anyone needing to assess ship stability can use to develop their own methodologies. This includes intact stability; damaged stability; stability in waves; the verification, validation and accreditation of assessment tools; etc.,” Reed said. “This is becoming critical with the International Maritime Organization (IMO) planning to issue its Second Generation Intact Stability guidance in the next year.”
According to Reed, the book serves as a mechanism to showcase the valuable work being done at Carderock to their sponsors, both internal and external, who can then show their superiors the significance of supporting this important work.

“These papers would not have been chosen by the international editorial board if the work did not constitute a valuable contribution to the literature,” Reed said.

The book contains material from two International Ship Stability Workshops and one International Conference on Stability of Shops and Ocean Vehicles: the 2010 workshop at Wageningen, Netherlands; the 2011 workshop in Washington, D.C.; and the 2012 conference in Athens, Greece.
Belenky worked with four other editors to make the selections for the book: Dr. Kostas Spyrou from the National Technical University of Athens in Greece; Dr. Frans van Walree from the Maritime Research Institute Netherlands; Dr. Marcelo Almeida Santos Neves from the Federal University of Rio de Janeiro in Brazil; and Dr. Naoya Umeda from Osaka University in Japan.

“We pick the most important contributions that were not published in journals, and that will make into the book,” Belenky said.

Belenky said that each chapter had two independent reviewers, mostly authors looking at other chapters. The reviewers were able to send the authors their comments, thus giving them an opportunity to make adjustments to their research.

“They could significantly change their paper, or update it since it was happening over the course of a few years. This allowed them to improve the content, make it modern,” Belenky said, adding that this is the point of the book, to accumulate relevant knowledge in ship stability and preserve it.