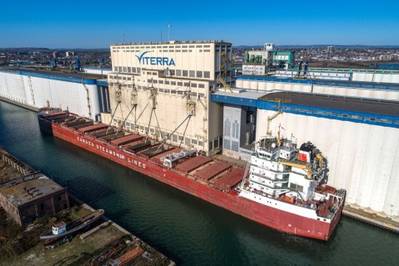 Canada Steamship Lines (CSL) set a new record at the Viterra terminal in the Port of Thunder Bay yesterday, when it loaded 31,362 metric tonnes of grain on CSL Welland, breaking the previous record of 31,143 metric tonnes. The cargo of wheat will be discharged in Montreal, destined for international markets.

“I commend Captain Rowe and his crew, the Viterra team, the Port of Thunder Bay, as well as our CSL teams on the ground who contributed to this achievement,” said Louis Martel, CSL President and CEO.

“Safely maximizing cargo load on a ship depends on many factors such as load sequencing and distribution, draft restrictions, vessel weight, water level and weather. In collaboration with the Viterra team, we were able to plan for and make the most of favorable conditions.” 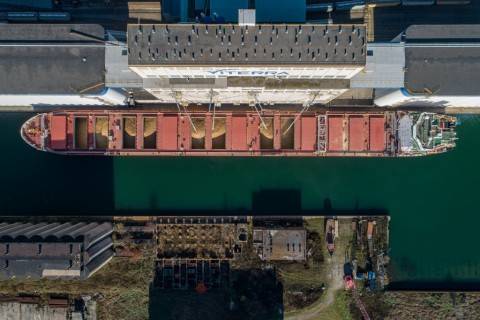 Notably, the 36,364 DWT Trillium Class bulk carrier is currently running on second generation biodiesel made from non-food biomass. CSL Welland is part of CSL’s biodiesel testing program – the longest ongoing trials of pure B100 biodiesel on vessels in Canada. Over the course of the tests this year, which were conducted on half of CSL’s Great Lakes fleet, CSL Welland was able to achieve a lifecycle reduction of 6,800 tonnes of CO2 compared to marine gasoil (MGO).

Across the entire Canada Steamship Lines fleet, the CSL biodiesel program has to date resulted in a 22% lifecyle reduction of CO2 compared to MGO.

Introduced in 2018, CSL’s biodiesel program has accumulated the most running hours on B100 with marine engines worldwide.

Replacing fossil fuel with biodiesel on vessels requires no modification of existing equipment and provides a viable carbon neutral fuel source over its lifecycle.