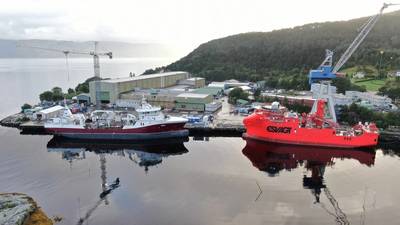 New Havyard Ship Technology AS is changing its name to Havyard Leirvik AS following the recent restructuring of the yard’s activities and changes to company strategy.

Part of the Havyard Group, Havyard Leirvik installs marine emissions reduction technology as well as other repair and modification services.

CEO Karsten Sævik explains that the yard, which in 2018 celebrated its 100th anniversary, was formerly also named Havyard Leirvik. "The yard is well known as Havyard, so it was natural to change the name back to Havyard Leirvik," he said.

In recent years, the yard has specialized in fitting out wellboats, electric ferries and service vessels for the offshore wind segment, but it also has long experience of work on other types of vessels.

Havyard Leirvik AS is scheduled to complete its fifth and sixth vessels for the Danish shipping company Esvagt. The newbuilds will operate as support vessels servicing offshore wind turbines. Two advanced wellboats for the shipping company Frøy are also on track for completion, and are also build numbers five and six for the same customer.

Havyard Leirvik AS said it is ready to start modification, repairs and service work at the quay in parallel with its newbuild activity. The last newbuild will have left the dock in August 2021, and the yard will then also be able to provide services in its roofed dry dock.