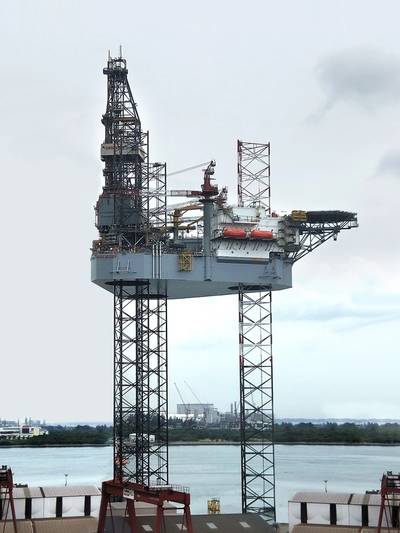 Singapore-based rig builder Keppel FELS announced Friday it has delivered a new jackup rig to EnscoRowan. The US based driller, the product of a recent merger between Ensco and Rowan, has a contract to deploy the rig in the UK North Sea.

The harsh environment newbuild ENSCO 123 is constructed to an enhanced version of Keppel’s state-of-the-art KFELS Super A Class design, the builder said. It was ordered by Ensco in November 2013 and originally planned for delivery in 2016.

ENSCO 123 is the ninth harsh environment jackup built and delivered by Keppel to EnscoRowan. Tan Leong Peng, Executive Director (Offshore) of Keppel Offshore & Marine, noted it is also the fourth enhanced KFELS Super A Class unit for the owner. The first three units in the series are each operating in the North Sea.

The rig features Keppel’s proprietary jacking and fixation system and can operate in a variety of environments in water depths up to 400 feet. It is designed to drill to total depths of 40,000 feet for large multi-well platform programs, ultra-deep gas programs and ultra-long reach wells, Keppel said.

The rig is also equipped with the Ensco-developed patented Continuous Tripping Technology (CTT), which can fully automate the movement of the drill string into or out of the well at a constant controlled speed.