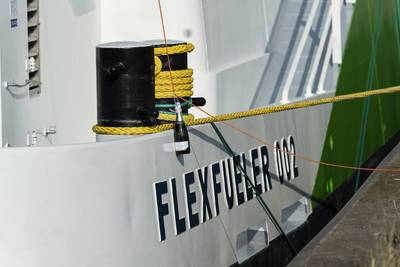 A new liquefied natural gas (LNG) bunkering vessel was christened in the Port of Antwerp on March 23.

The new vessel, named FlexFueler 002, was built by Dutch shipbuilder Kooiman Marine for owners gas infrastructure group Fluxys and LNG supplier Titan LNG, and it will ensure that ships can refuel with LNG anywhere in the port. It will operate from its permanent moorings at quay 526/528 and supply LNG throughout the port and the Western Scheldt.

It is the third vessel to join Titan LNG’s expanding infrastructure in the Amsterdam-Rotterdam-Antwerp (ARA) region, operating in addition to the FlexFueler 001 and the Green Zeebrugge.

The demand for LNG as a cleaner burning alternative marine fuel is steadily increasing, and the Port of Antwerp is ramping up its LNG infrastructure. The port can even supply carbon-neutral variants of LNG, such as liquid biogas (from organic waste) or liquid synthetic methane (from green hydrogen and captured CO2).

Jacques Vandermeiren, CEO, Port of Antwerp, said, “As the fifth largest bunkering port in the world, we are committed to playing a pioneering role in the integration of low- and zero-carbon fuels to the bunker market. The arrival of the FlexFueler 002 marks an important landmark in the transition to a multi fuel port. LNG as a marine fuel is now available throughout the port, enabling us to further facilitate the energy transition of shipping in the port, as well as the region of Antwerp.”

Ronald van Selm, CTO, Titan LNG, said, "The FlexFueler 002 is the third bunker vessel to join Titan’s fleet, providing LNG as a marine fuel across the ARA region. We expect to have the largest network of LNG bunkering vessels in Europe by 2025 and will continue to work with our partners, both in Europe and around the world, to ensure that shipowners are able to start the journey towards a zero-carbon future today."