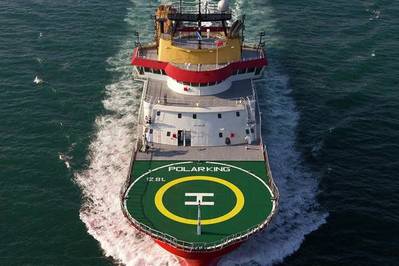 The delivery to new owners, who are yet to be named, comes following last week's announcement by GC Rieber that the vessel would be sold and that the proceeds would be used to repay the vessel's outstanding debt in full.

The 110.6 meters long Polar King is on a charter (until September) with marine cable supplier Nexans. It has been on a charter with Nexans since January 2017 conducting cable lay support and trenching worldwide, with last location (per AIS) being Norway.

The multipurpose subsea vessel was built at Freire Shipyard in Spain and was delivered in March 2011.

While the vessel owner said nothing on the value of the deal, VesselsValue, a specialist website providing vessel value estimates, has the Polar King at $21.79 million.

GC Rieber, which operates nine and has direct and indirect ownership in 29 advanced special purpose
vessels within the segments Subsea & Renewables, Ice/Support, and Marine Seismic, on Tuesday reported a second-quarter loss of 121.3 million.

For comparison, in the corresponding period of 2019, GC Rieber recorded a net profit of NOK 93.9 million, which reflected a NOK 101.6 million book gain from the sale of the icebreaking research vessel «Ernest Shackleton» to the new owner Istituto Nazionale di Oceanografia e di Geofisica Sperimentale (OGS).

During the second quarter 2020, the company booked impairment of Subsea & Renewables vessels of NOK 128.7 million