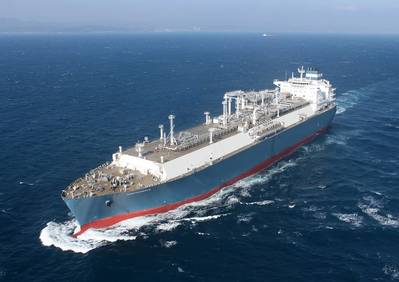 The 170,000 cbm LNG FSRU, measuring 294 meters in length, 46 meters in width and 26 meters in depth with the storage capacity of 70,000 metric tons of chilled natural gas, will be chartered to Lithuania’s Klaipedos Nafta under a long-term contract.

The naming ceremony of the LNG FSRU, Independence held in Ulsan, South Korea today was attended by Dalia Grybauskaite, President of Lithuania; the sponsor of the ship, Leif O. Höegh, Deputy Chairman of Höegh LNG; and 130 other guests.

“We are pleased that the LNG FSRU will play a critical role in supplying LNG in Lithuania and we hope to keep up the close cooperation with Lithuania for the construction of energy infrastructure,” said Mr. Lee Jai-seong, Chairman & CEO of Hyundai Heavy at the ceremony.

LNG FSRU receives liquefied natural gas from offloading LNG carriers. The installed regasification system provides gas send-out through flexible risers and pipelines to shore. LNG FSRU take a year less and cost half as much as an onshore LNG terminal to complete. The facility, known as ‘the LNG plant on the ocean’, can also move from place to place where the energy demand is in growth as it has its own propulsion system.

Hyundai Heavy, a leading integrated heavy industries company, independently developed an engineering capability that can minimize the operational loss of an LNG FSRU by extending its maintenance working cycle from 5-10 years.