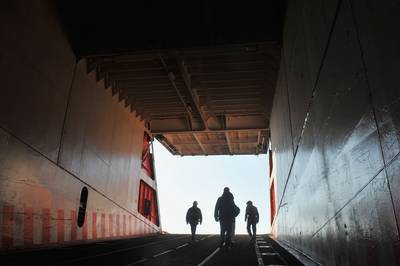 Another active week in the newbuilding market is reported in the latest Clarkson Hellas S&P Weekly Bulletin, as follows:

Dry Bulk Carriers
Starting with the larger sizes Hyundai Merchant Marine (HMM) are understood by Clarkson Hellas to have placed an order for two firm 210,000 dwt Newcastlemax at Bohai, with delivery of both vessels due in early 2017.

The majority of ordering this week has been focussed on the Kamsarmax market; Weihai Samjin (Korean owned yard with facility based in China) has taken two separate orders for 82,000 dwt Kamsarmax from NK Shipping for four firm plus two options, and two further firm vessels from another Korean buyer, although yet unknown. Pricing is yet to be disclosed; however delivery of all six firm vessels is planned within 2016.

Scorpio Bulkers have had further activity in this sector placing orders for four firm 82,000 dwt Kamsarmax at Jiangsu New Yangzijiang, with delivery from mid-2015. Scorpio are also understood to have contracted two firm 60,000 dwt Ultramax at Mitsui Shipbuilding, with delivery in mid-2016.

Although main terms are understood to have been agreed some months ago, Euroseas have announced an order for two firm Crown 63 design Ultramax at Sinopacific Dayang, with delivery at the end of 2015 and early 2016.

In the Weekly Bulletin, Clarkson Hellas also report that COSCO has also announced an order at their Zhoushan facility for two firm Ultramax for a yet unknown Asian Owner, with relatively prompt delivery at the end of 2014.

Tankships
In the tanker market, DHT Management have ordered two firm plus one option 300,000 dwt VLCCs at HHI, with delivery of the firm vessels from mid-2016 and option at the end of 2016 if declared.

In China, AVIC Dingheng have taken an order for two firm plus two option 15,000 dwt chemical/product tankers from Tarntank of Sweden. The vessels will be based on a Rolls Royce design and incorporating Wartsila LNG powered main engines.

At the smaller end of the scale Guangzhou Wenchong have taken an order for a single 1,600 dwt bunkering tanker from Vermont Shipping, understood to be for use carrying aircraft fuel.

Gas Carriers
In gas, Clarkson Hellas report that India LNG (a consortium of K Line, NYK, MOL and Shipping Corporation of India (SCI)) have placed an order for a single 173,000 cu.m LNG carrier at HHI, with delivery in the second quarter of 2016.

It has also been reported that Kyoei Tanker Co have contracted one 83,000 CBM LPG carrier at Mitsubishi for delivery in September 2015. Similarly Iino Kaiun have announced an order for one 82,200 cu.m LPG carrier at Kawasaki Heavy with delivery in March 2016. These two LPG orders are both understood to be lined up for charter to Astomos Energy once delivered.