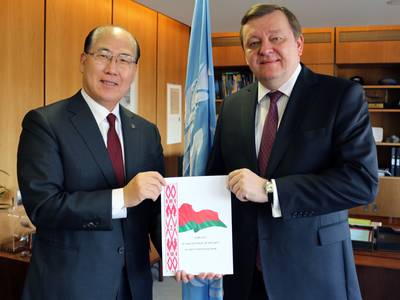 Just one week after becoming the 172nd member state of the International Maritime Organization (IMO), the Belarus has acceded to three IMO treaties covering a variety of ship safety measures, including conventions on load lines and facilitation of maritime traffic.

Ambassador of the Republic of Belarus to the U.K., Sergei Aleinik, met IMO Secretary-General Kitack Lim at IMO headquarters in London on December 5 to deposit the instruments of accession. The treaties acceded to are:
Belarus deposited its instrument of acceptance of the Convention on the International Maritime Organization with the Secretary-General of the United Nations Ban Ki-Moon on November 29, 2016.