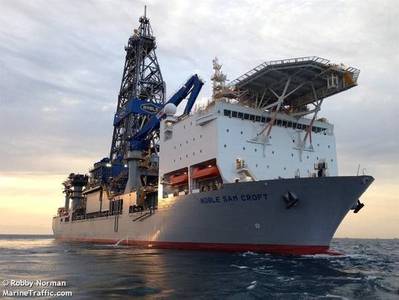 Following the announcement of a proposed merger between offshore drillers Maersk Drilling and Noble Corporation on Wednesday, a Noble shareholder said it would vote against the deal.

The combination is a primarily all-stock transaction where the shares of the combined company will be distributed equally between the current shareholders of Noble and Maersk Drilling.

The two drillers said that the proposed transaction completion was targeted to close in mid-2022, upon which the shareholders of Maersk Drilling and Noble will each own approximately 50% of the outstanding shares of the new holding company.

However, one Noble shareholder, Standard Drilling, said it Wednesday it would vote against the deal.

"Standard Drilling fully supports industry consolidation in the offshore drilling market. However, we, and other shareholders that have contacted us, are concerned about the proposed exchange ratio and will consider to vote against the transaction“ says Martin Nes, Chairman of the Board of Directors of Standard Drilling.

In a letter sent to Noble Corp. chairman, Nes said the merger was presented as a merger of equals, with appealing optics.

"Standard Drilling fully supports industry consolidation in the offshore drilling market, but in our view this is not a merger of equals. The transaction between Noble and Maersk Drilling implies a c. 40%/ 60% split basis enterprise value and a c. 30% premium in the [Maersk Drilling] share price vs close on November 9th.

"We argue the value of 7G floaters, of which Noble has 7, should be comparable to CJ70 Jack Ups, of which [Maersk Drilling] has 5. This is due to better rates and utilization presently in the floater market. On this basis, we argue the gross asset values in the two companies are similar. This view is also supported by the multiples in the proposed transaction, with Noble trading at 6x ’22 EV/ EBITDA with 7% FCF yield while Maersk Drilling would trade at ‘13x with 1% FCF yield.

"Standard Drilling, as a shareholder in Noble, will at the proposed exchange ratio where Maersk Drilling will receive c 1.614 Noble shares, consider to vote against the transaction. We have been contacted by other major shareholders who share our concerns."

The transaction is subject to Noble shareholder approval, acceptance of the exchange offer by holders of at least 80% of Maersk Drilling’s shares, merger clearance and other regulatory approvals, listings on New York Stock Exchange and Nasdaq Copenhagen, and other customary conditions.