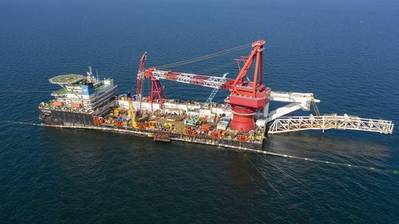 Allowing Nord Stream 2 to pump Russian gas to Germany will not threaten supplies to the European Union, the German Economy Ministry said on Tuesday, clearing a major hurdle for the disputed pipeline.

While the pipeline is ready to start operations, it still needs to be certified by Germany's Federal Network Agency and the ministry's supply analysis is a key requirement for the regulator to continue that process.

"In its analysis, the Federal Economy Ministry concludes that granting certification is not threatening security of gas supply to the Federal Republic of Germany and the European Union," the ministry said in a statement.

It said it has submitted its analysis to the regulator following discussions with neighboring EU countries. Italy, Austria, Poland, Czech Republic, Hungary, Estonia, Latvia, and Lithuania had all been given a chance to consult, it added.

The German regulator has until early January to certify the pipeline but may make its decision earlier. Once it has made its recommendation, it goes to the European Commission, which has another two months to respond.

Europe's most controversial energy project, led by Russian gas company Gazprom, has faced resistance from the United States and Ukraine, among others, who say Russian President Vladimir Putin could use it as a tool to achieve unrelated political goals and circumvent Ukraine as a gas transit route.

The pipeline has gained more prominence as Europe faces a gas supply crunch that sent prices to record levels this month.

The Kremlin has denied that Russia is withholding supplies in order to exert pressure for quick regulatory approval of Nord Stream 2.