Winter in US Northeast Takes a Toll on Ferries 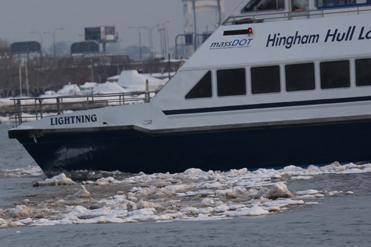 With its black hull rumbling against a field of broken ice, the Warren Jr. slowly eased away from a dock in the Boston suburb of Hingham on Tuesday, aiming to clear a path for some of the four ferries that carry commuters from here into the city each day.

But in a sign of how long Massachusetts has been gripped by freezing temperatures, no other vessels followed, as the tide narrowed the channel behind the oceangoing supply boat pressed into service as an icebreaker. It was the 15th day of canceled ferry service since late January and the outing was meant to speed the fleet's return to service, which could still be days away.

"We're just not getting any break from the weather," said Captain Leon "Tiger" Macdonald, standing on the Warren Jr.'s bridge a few decks above the waterline.

He has overseen crews for a month in a mostly losing battle against the ice to keep running the boats that usually deliver 1,750 commuters a day to Boston's downtown financial district.

The idled boats are one piece of the unprecedented collapse the Massachusetts Bay Transportation Authority suffered during a harsh winter that so far has brought 104.1 inches (2.64 meters) of snowfall.

The city's all-time snowfall record of 107.6 inches (2.73 meters) was set in the winter of 1995 to 1996 and series of storms this week could leave a new high mark, said National Weather Service meteorologist Bill Simpson.

Along with the boats, storms delayed or canceled subway and commuter rail trains over several workdays, leaving downtown Boston ghostly and cutting in half February sales for some businesses, said the Retailers Association of Massachusetts.

Some rail delays continue and in all the state's economy likely took a $1 billion hit from the storms including the lost hours of those who could not get to work, research firm IHS Global Insight estimates.

The problems have become the first big test for the state's new Republican governor, Charlie Baker. Observers had long warned the transit system faced shaky finances. Baker has appointed a review panel and the system's general manager has resigned.

Out on the Ice
The severe weather has taken a toll on water traffic up and down the northeastern U.S. coastline including in busy New York Harbor, where tugboats have been used to clear a pathway for commuters aboard the Staten Island Ferry.

With U.S. Coast Guard icebreakers stretched thin, Hingham ferry operator Boston Harbor Cruises sent in the Warren Jr. It costs about $500 an hour to run, paid for by the state system.

Rick Nolan, principal of the family-owned ferry business, said a challenge of the snowfall is that the freshwater crystals seem to freeze into a harder layer of ice than the saltwater beneath it. Nolan now rides on the Warren Jr. in the early morning hours to decide if ferry runs are safe to begin.

"I'm very nervous about the aluminum skin and the fiberglass skin boats running into a hard piece of ice," Nolan said.

Tuesday was his latest cancellation, the waters again clogged as the Warren Jr. got under way to renew a channel about three quarters of a mile (1.2 km) from the Hingham ferry dock to open water. Frozen lumps sometimes made the vessel's hull rattle like an overloaded clothes dryer.

Macdonald, the captain, recounted how a few ferries have squeezed in runs lately though one boat had to be towed after it became stuck in the ice. He hopes for a clearing warm spell soon.

"We got away with it for a little while, but the weather closed in on us," Macdonald said.