Norwegian Has Enough Cash to Stay Afloat for 18 Months

By Helen Coster and Joshua Franklin May 7, 2020 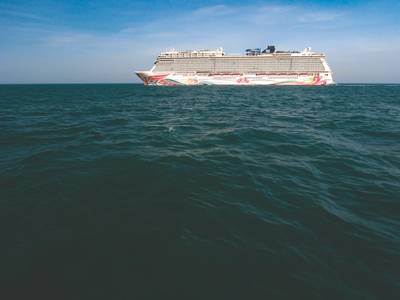 Norwegian Cruise Line Holdings Ltd’s $3.5 billion in cash on hand will be enough to bankroll the company for “at least 18 months” without any new revenue due to the coronavirus pandemic that has halted voyages, Chief Executive Frank Del Rio said on Thursday.

“That’s enough to cover our cash burn under a zero-revenue environment for at least 18 months, not 12, 18 months,” Del Rio told Reuters in a phone interview.

Norwegian’s shares, which have lost almost 80% of their market value this year, extended intraday gains after Del Rio’s remarks to trade up as much as 12% at $12.43 on the New York Stock Exchange, far outpacing a broader market rally.

The comments come a day after Norwegian completed a $2.4 billion fundraising through debt and equity offerings, giving the idled cruise operator needed funds to survive extended voyage suspensions due to the pandemic.

“So unless you want to make the case that this pandemic is going to close us down more than a year and a half into almost 2022, we believe the company is in a great financial position, has all the cash and liquidity needed to survive a prolonged lay-up and be in a position to come out strong,” he added.

Del Rio said he hopes the company will restart operations at some time in the third quarter, and that it is seeing high demand for cruises in Asia.

The possibility there will be no cruises in 12 months is “near zero,” Del Rio said.

To help prepare for a resumption of business, Norwegian is consulting with former U.S. Food and Drug Administration Commissioner Dr. Scott Gottlieb to develop health protocols, which may include improving and increasing the frequency of disinfecting and cleaning, Del Rio said.

In an interview with USA Today on March 9, Gottlieb said, “It’s an awful risk to pack a lot of people on a cruise ship.”

The Miami-headquartered company faces proposed class-action lawsuits alleging it made false and misleading statements to the market and customers about COVID-19 - the illness caused by the novel coronavirus - and its impact on its business. The company has said the allegations are without merit.

In March, Florida’s attorney general announced an investigation related to Norwegian’s marketing to customers during the coronavirus outbreak, based on allegations it downplayed the severity and highly contagious nature of the virus in an effort to sell cruises.

Other attorneys general and governmental agencies are conducting similar investigations, according to the company.

“Cruise ships can be among the healthiest places in the world to be during a pandemic,” Del Rio said on Thursday. “It is a controlled environment.”

Some of the earliest large COVID-19 outbreak clusters were aboard huge cruise ships in which thousands of passengers and crew were packed in tight quarters as the virus quickly spread.