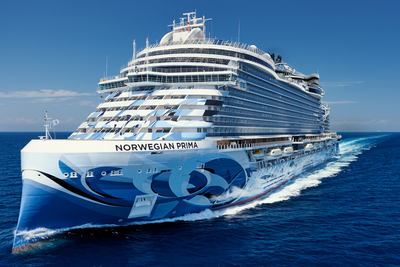 Norwegian Prima, the first of six vessels from Norwegian Cruise Line’s (NCL) new Prima Class of ships was delivered at Fincantieri's shipyard in Marghera on Friday.

Along with her sister-ships, Norwegian Prima will form the backbone of the future NCL fleet, at more than 142,500-tons, almost 300 meters long, and accommodating 3,215 guests. Deliveries are scheduled through 2027.

Starting in the summer of 2022, Norwegian Prima will offer itineraries in Northern Europe with voyages from Amsterdam, Netherlands, and Copenhagen, Denmark giving guests the opportunity to explore the Norwegian Fjords and Baltic Sea.

It will then sail a 12-day transatlantic voyage from Southampton to New York via Scotland's Shetland Islands, Halifax in Nova Scotia with an extended overnight stay in Reykjavik, Iceland.

Through the fall and winter, Norwegian Prima will offer a variety of Bermuda and Caribbean cruises from New York; Galveston, Texas; Miami and Orlando (Port Canaveral), Fla., including calls to Harvest Caye, the NCL's private resort destination in Belize as well as the NCL's private island, Great Stirrup Cay, in the Bahamas.

NCL is part of Norwegian Cruise Line Holdings Ltd., the U.S.-based company, which is one of the world’s leading cruise operators.

Besides NCL, Norwegian Cruise Line Holdings Ltd. operates the Regent Seven Seas Cruises brand, to which Fincantieri will deliver next year in Ancona a third luxury cruise ship, Seven Seas Grandeur, after Seven Seas Explorer (2016) and Seven Seas Splendor (2020), as well as Oceania Cruises, for which the group has in its orderbook two new-generation cruise ships which will start the Allura-class.