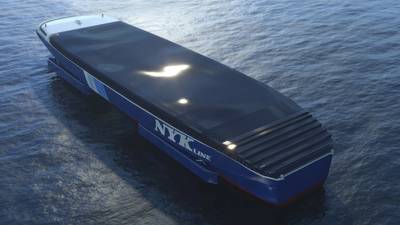 "Energy and Car transport is robust but lower dry bulk market due to production stoppage in Brazil and Western Australia," it said.

In the car transportation division, shipping traffic was strong to North America and within Asia. Also, the ship deployment efficiency was increased by reducing the shipping volumes mainly in trilateral transport. In the auto logistics segment, activities were conducted with the aim of both strengthening the business base and expanding the business, including new logistics proposals through collaborations utilizing the group network.

In the dry bulk division, more new ships were commissioned than the number of ships scrapped, and there continued to be excess capacity. Although the cargo volumes of iron ore were recovering, the impact of the supply disruptions that occurred in Brazil and Western Australia between January and March has lingered.

The cargo volumes of coal and grain were firm, but market levels were lower compared to the previous fiscal year.

Under this environment, along with continuing to work to secure long-term contracts, cost reduction initiatives such as thoroughly conducting efficient navigation were implemented, and efforts were made to improve the bottom line, including the reduction of ballast voyages through innovations to the cargo combinations and ship deployments. In addition, progress was made in returning the high cost chartered ships early.

In the energy division, although the market conditions improved compared to the previous fiscal year for VLCC (very large crude carriers), the improvement was limited due in part to the increased shipping capacity and the deterioration to shipping traffic resulting from an increase in regular maintenance at the oil refineries.

In petrochemical tankers as well, although the market is expected to rise going forward, no major growth in shipping traffic was seen. In LPG carriers, in addition to more active shipping volumes from the US to Asia, the ton-miles increased due to changes in the trade patterns resulting from the trade friction between the US and China, and the market levels were pushed much higher.

In LNG carriers, through the end of the first quarter of the current consolidated fiscal year, three new ships were delivered, and the bottom line was firm based on support from the long-term contracts that generate stable earnings.

In the offshore business as well, FPSO (floating production, storage and offloading) vessels, drill ships and shuttle tankers were steady. As a result of the above, the overall Bulk Shipping segment recorded lower profit on lower revenue compared to the previous fiscal year.

In the container shipping division, Ocean Network Express Pte. Ltd. (ONE), which is an equity-method affiliate, realized a steady recovery of the overall liftings and slot utilization, and the liftings particularly increased on the major North America and Europe trades, as well as within Asia.

In addition, freight rate levels were favorable compared to the same period of the previous fiscal year in both the North America and Europe trades.