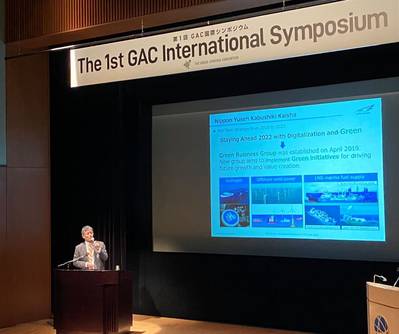 At the first symposium of the Green Ammonia Consortium (GAC) on January 22, Japanese shipping company NYK presented its approach of using ammonia as marine fuel for zero-emission ships.

Ammonia does not emit carbon dioxide (CO2) when it is heated and would thus be expected to contribute to the effort to address global warming. NYK is participating in the consortium to consider not only the maritime transport of ammonia as a power generation fuel used by electric power companies but also the use of ammonia as marine fuel, one of the solutions for decarbonization.

At the symposium, lectures were segmented into four fields in which CO2-free ammonia could be used — production, technology, demand, and regulation. NYK, on the demand side, made a presentation introducing ammonia as marine fuel from both the technical and operational side.

Japan’s GAC was established in April 2019 to build a value chain from supply to use of CO2-free ammonia.