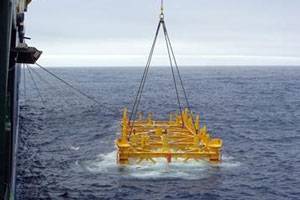 On June 20, Technip, supported by Jumbo Offshore, completed the installation of four subsea structures including two Module Support Frames each weighing approximately 150 tonnes. The foundations were lowered to the Grand Banks sea floor at a depth of approximately 120 meters and will support subsea manifolds and flowlines that are part of a multiple well tie-back. The project was executed at the White Rose oilfield, offshore Newfoundland, on behalf of a major Canadian energy company.

The offshore works were designed as a co-ordinated programme of tasks centred on the crane capacity of the HLV Jumbo Javelin, but controlled by subsea Survey and work class ROV operations based on one of Technip’s vessels, the Deep Pioneer. The scope of work was co-ordinated via the Technip Offshore Construction Manager and assisted by having key members of Technip’s crew temporarily join the Jumbo Javelin.

In the port of Bay Bulls, the Jumbo Javelin was prepared for the job and loaded with two large and several smaller structures. The weight of the structures varied from 30 to 150 tonnes, the larger of which were fitted with pile guides to facilitate future pile driving operations.

Using its two 900 tonnes Huisman mast cranes for loading as well as for subsea installation, the cranes of the Jumbo Javelin were re-reeved from a 16-fall to a 4-fall configuration. This way, a depth of 120 meters could be reached easily. As soon as weather conditions allowed, the ship sailed to the White Rose field.

On arrival at the offshore installation site and having co-ordinated with the Deep Pioneer which had pre-installed the positioning guides, the sea-fastenings were removed and lift rigging connected. The first foundation was then successfully overboarded and lowered down to the seabed. A precise operation monitored by the attendant Deep Pioneer which could relay real time subsea positioning and video data to the team on the Javelin. This operation required both vessels to work in close proximity of each other and hence rely on their GPS controlled DP2-systems. The remaining structures were similarly deployed, several of which only required to be deployed to temporary wet storage positions. First oil from the North Amethyst project is expected to flow at the end of 2009.

Technip’s operating center in St Johns, Canada, which has had an extensive involvement with the White Rose Field, was happy to propose Jumbo Offshore as part of its installation strategy as the companies have forged strong links through other subsea campaigns, notably in the Asia Pacific region. The crews of Deep Pioneer and Jumbo Javelin completed the challenging job in tandem operation and close cooperation. Jumbo Offshore again made a valuable contribution to an offshore installation project by helping execute an integrated transportation and installation campaign safely and efficiently.