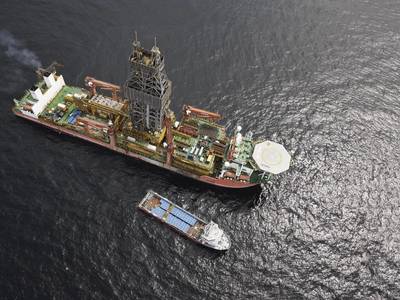 COPENHAGEN, Feb 20 (Reuters) - Prospects for the offshore oil drilling market are improving but profits for drillers are still under pressure and rates will not rise before 2019, the head of A.P. Moller-Maersk's energy business said.
Oil firms have seen cash flow climb in 2017 a high since a three-year slump in crude prices, lifted by their cost-cutting plans and a crude price recovery.
Although this has spurred new investment, it has yet to benefit suppliers, such as Maersk, which sold its North Sea-focused oil and gas business to France's Total last year and now focuses on providing transport and logistics.
"You see from the oil companies' 2016 and 2017 earnings that they've performed really well. You also see that they have started increasing capital expenditure," Claus Hemmingsen told Reuters on the sidelines of Maersk's capital markets day.
"But one of the reasons that they're faring better is also because they've put an enormous pressure on their suppliers," the CEO of the energy unit said, adding "profitability is still low and under pressure" for suppliers.
Hemmingsen said the industry could see a "small uptick" in business this year, with increased demand for jack-up rigs for shallow waters, although there was still little sign of a boost in demand for deepwater rigs.
"We believe the market in 2018 will still be under pressure," he said. "I think day rates will start increasing in 2019 and 2020 but we don’t expect the offshore services market to come back to the level before the oil price crashed."
Oil prices plunged from above $100 a barrel in 2014 to below $30 at the start of 2016. They are now at about $65.
Hemmingsen said Maersk was still seeking a buyer or partner for its offshore drilling and supply service unit, but did not indicate how far the search had progressed.
Danish business daily Borsen reported in January that Maersk might be looking to peers Norwegian peers Aker, Odfjell Drilling and Borr Drilling to sell the unit.
Hemmingsen declined to comment on the report.