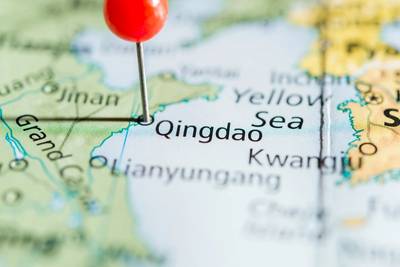 A tanker carrying around one million barrels of oil products was involved in a collision near the Chinese port city of Qingdao, spilling oil into the Yellow Sea, China's Shandong Maritime Safety Administration and tanker representatives said on Tuesday.

"The force of the impact on the forward port side caused a breach in cargo tanks and ballast tanks, with a quantity of oil lost into the ocean," Goodwood said, adding all of the crew had been accounted for and there were no injuries.

It was not immediately possible to contact the owner of the Sea Justice.

"The oil spill came after a clash between two vessels," an official at the maritime safety authority told Reuters on condition of anonymity, confirming that no one was injured.

The A Symphony, a Suezmax tanker was last seen near the Qingdao port, live shipping data on Refinitiv Eikon showed.

The tanker called at Linggi International Transhipment Hub, near Malacca in peninsular Malaysia, earlier this month, where it fully loaded oil and set sail for China, the data showed.

When contacted by Reuters, an executive at Run Cheng International Resource (HK) Co said the company owned the 150,000-tonne cargo of bitumen on board A Symphony.

Bitumen, a mixture of hydrocarbons from residue in refining, is used for road surfacing and roofing. However, shipping sources said bitumen is typically moved in smaller vessels with specialized heating rather than suezmaxes.

The 272 x 46 moil tanker was sold in May 2019 to its new owners Symphony Shipholding SA and NGM Energy, Equasis data showed.

Symphony Shipholding SA and NGM Energy could not be immediately reached for comment.