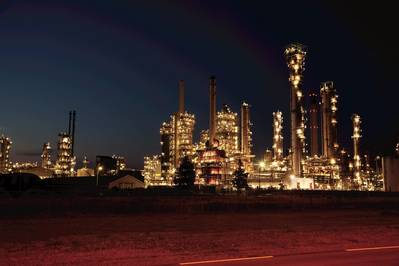 S-Oil, South Korea's third-largest refiner, said on Wednesday that regional refining margins are expected to improve in the fourth quarter on the back of inventory build-up ahead of implementation of stricter rules on marine fuels in 2020.

The refiner, whose top shareholder is Saudi Aramco, said in an earnings statement, strong demand for heating oil was also expected to support refining margins, along with the International Maritime Organization (IMO)'s stricter shipping fuel rules set to take effect from 2020.

"Refining margin is expected to improve further on the back of robust demand growth in the region by 0.7 million barrels per day for seasonal pickup along with inventory build-up in preparation of IMO implementation," the refiner said in the statement.

Demand for low-sulphur marine fuels has climbed steadily this year as the shipping industry prepares for the IMO's global sulphur cap on marine fuels to be lowered from January 2020 to 0.5% versus 3.5% currently.

Rises in freight rates and crude premiums have weighed on Asian refiners' margins following attacks on Saudi Arabia's oil facilities in mid-September and U.S. sanctions on Iran and Venezuela.

But Cho said the impact of higher freight rates on S-Oil's business is limited as it mainly ships crude oil based on term contracts. He added the refiner planned to operate its major plants at maximum rates.

S-Oil posted an operating profit of 231 billion won ($196.78 million) for the July-September period, down 27% from 316 billion won over the same period a year earlier, dragged down by inventory-related losses and scheduled refinery maintenance.

In the third quarter this year, the refiner operated its crude distillate units at 97.4%, down from 99.2% in the second quarter, according to the company's earnings statement. It runs a 669,000 barrels-per-day (bpd) refinery in the southeastern city of Ulsan.

Shares of S-Oil rose 1% on Wednesday morning after the earnings announcement, while the wider market edged down 0.3%.