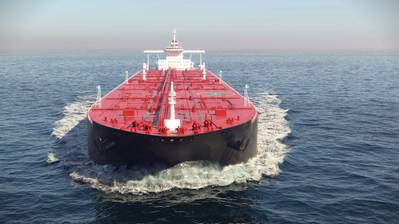 Oil tanker rates are soaring globally as traders scramble to cope with jitters over possible disruption in Russian supplies, as well as war risk premiums for ships plying the Mediterranean region following Moscow's invasion of Ukraine.

Shipowners are also grappling with higher fuel costs after oil prices soared nearly $2 per barrel on Friday, with Brent back above $100. The global energy sector is concerned that Europe and the United States may impose sanctions on Russian exports and severely disrupt supplies. O/R

Sources were also worried that any additional widening in sanctions could render some Russian oil and fuel supplies off limits, and trigger a scramble by fuel and oil traders to secure alternative supplies that could tie up vessels on trips to exporters outside the Black Sea region.

Fuel tanker rates from the United States to Europe jumped more than 8% on Thursday, surging to their highest level since May 2020. The cost of bunkering fuel at the world's largest bunkering hub Singapore BK380-B-SIN jumped 6% on Thursday to $555 per tonne, the highest since 2019.

"I'm expecting quite a mess at the moment," a Singapore-based fuel trader said, speaking on condition of anonymity because of the sensitivity of the matter. "The war risk premium is expected to increase. Also, quite a lot of Russian cargoes that are intended to load might be canceled too."

Top buyers of Russian oil are struggling to secure credit guarantees at Western banks, or find ships to take crude oil from one of the world's largest producers.

Rates for Very Large Crude Carriers (VLCCs) from the Middle East to China, Asia's benchmark for crude freight, rose 4.77 Worldscale (W) to 38.82W on Friday, a shipbroker said, referring to points on the pricing index operated by the Worldscale Association that is used as an industry tool to calculate freight charges. Each VLCC can carry two million barrels of oil.

Shipowners are concerned about rising bunker fuel prices and have asked for higher freight rates, while owners of mid-sized Aframax tankers who have ships plying the Mediterranean are worried about war risk premiums, the broker added, speaking on condition of anonymity because of the sensitivity of the matter.

"Activities (in the East) are quiet for now But we will know gradually how the freight market picks up further," another shipbroker, based in Singapore, said, also speaking on condition of anonymity.

The shipping index benchmark for Long-Range 1 (LR1) vessels which can carry 55,000 tonnes of clean products from the Middle East to Japan, also known as TC5, rose to 102.5W as of Friday, up from 97.5W last week.

(Reporting by Koustav Samanta and Florence Tan in Singapore; Editing by Gavin Maguire and Kenneth Maxwell)

Russia to Spend $30 Billion on Northern Sea Route by 2035

Russia is to spend almost 1.8 trillion roubles ($30 billion) on the Northern Sea Route development project up to 2035, according to a document uploade