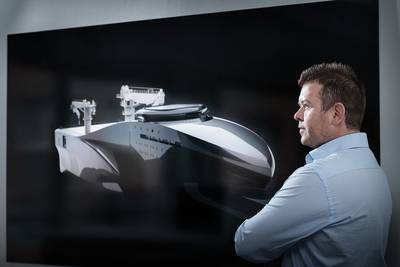 There’s a new vessel design needling this competitive little shipping town. Still unknown in design circles, the “porpoise-nosed” TwinBow is brainchild to local start-up OilCraft and its wunderkind chief exec, Stian Teige, a self-taught computer renderer.
His year-old outfit is going all out presenting designs to the savvy offshore shipping community centered on this picturesque fisheries town with a channel through it. Together with heavyweight joint venture partner LMG Marin — launcher of a thousand ships, many of them drillships or gas-powered ferries — OilCraft is drumming up sales leads for its trimaran and single-hull TwinBows.
Interest from deepwater oil and gas player Statoil; offshore construction specialists; seismic fleet owners and global offshore shipping giants based here has Teige feeling confident a deal will emerge in 2014 for a TwinBow new-build.
“I have a good feeling. Definitely the goal for this year is to secure a vessel order, and I think it will happen in 2014,” he said. By 2015, his intellectual property will be bundled into the new LMG JV.
He’s been close to a sale, very close. A year ago, the fledgling company revealed a surprise Letter of Intent for five seismic survey vessels from an unnamed survey company. The order shrunk to two vessels and then put on hold.
The TwinBow seismic survey designs raised eyebrows with its double bows and “triple sterns” optimized for streamer, winch and crane loads. The designs aim ostensibly to achieve the stability of short, wide survey vessels like the Ramform class without compromising on speed.
Teige says upwards of 20 knots are imaginable, and he’s readying tests in a tow tank to simulate 25 knots and to show a TwinBow is like having the double advantage of Ulstein’s X-bow and the wave-piercing bulb of competitive designs: more horizontal movement; less bobbing or slamming; less drag and resistance and therefore greater fuel economy and stability.
Add the dynamics of a trimaran, and the design truly sets itself apart.
“A traditional three-hull vessel has a narrow main hull. We thought a larger beam would permit larger cargoes and gear, and tests (with researchers) at SINTEF in Trondheim show little impact on drag for having a wider hull,” says Teige. The pontoon hulls “adjust” for ballast to offer lower “velocity” through large waves.
OilCraft has also patented two helideck concepts: one tucks communications equipment away beneath it and eliminates the mast for some designs, and a work-deck version for offshore service vessels retracts into the superstructure.
“The 26-m beam will take the biggest choppers,” he adds.
On the anchor-handling design, Teige has rounded out the superstructure side of the work deck for space and vision. Arguably the most noticeable patented design is the double bow: one lower to lengthen the waterline and one higher to lift the vessel should it plunge too deeply. Teige came up with the idea while contemplating entering a design competition.
“The jury said it was a good idea,” Teige says.
The ensuing design laurels launched a company which he has had to nurse with savings from past jobs, including a position with ships gear maker Odim. He was there when Rolls-Royce, now a rival local designer, acquired Odim. By August 2013, start-up help from export support agency, Innovasjon Norge, was paying off, and a Letter of Intent was quickly revealed. Class giant DNV GL was in early with class approval.
Then, bridge financing fell through, and the client cut the order to two seismic vessels before putting it on hold completely pending finance. The client could be back soon, as some building contracts for those new-builds are understood to still be in place.
If the seismic order falls through, interest in a combined wellboat and fish factory vessel seems strong, and there are other designs. A drawing of a smaller seismic support vessel has been produced at the behest of survey ship owners. There’s a krill (medical plankton) trawler for the southern oceans. We also see a rendered inspection, maintenance and repair drawing of a vessel fitted with a 150t crane for remote autonomous vehicle launch and recovery and accommodation for 90.
Another potential client deal also appears near for a small offshore construction design: “On a 120-m vessel, you can have 3,000 sq. m. of work space. You can fit bigger cranes to smaller vessels, perhaps up to 600 metric tons,” said Teige. He said he needs more structure testing and engineering, but heavyweight JV partner LMG can tap at least one large marine engineering pool, including the 125-strong LMG subsidiary Midcon Designers of Szczecin, Poland.
For now, LMG supports the general design work and has assigned OilCraft the task of pleasing the offshore shipping segment until a new LMG OilCraft AS takes shape. Come early 2015, OilCraft’s intellectual property will reside in the new JV.
Filtering out of the sleek, black-and-white office, we bump into a table strewn with drawings of a small anchor-handling tug supply ship, or AHTS. Its round tanks appear recently penciled with squared sides and rounded corners. The drawing says LMG 80.
“This is for a client interested in a series of AHTS’s. It has not been communicated to the public,” said Teige’s CFO, a member of OilCraft’s board and a colleague from former employer Seaonics from just down the stairs.
“This is one of our concrete business leads,” the young CFO says, adding, “All our concepts are based on actual leads from ship owners.”
Something else he says suggests Chinese bank involvement in one of the potential orders and export credits from Norwegian export enabling agency, Eksportfinans.
For LMG, it’s clear the new vessel designs offer fresh marketing impetus and a potential new look for future vessels. Already the world’s largest supplier of gas-fired vessel types, and no mean OSV designer, LMG ferries, coastguard cutters, motor torpedo boats and advanced research vessels could soon be sporting a new look.

(As published in the November 2014 edition of Maritime Reporter & Engineering News - http://magazines.marinelink.com/Magazines/MaritimeReporter)