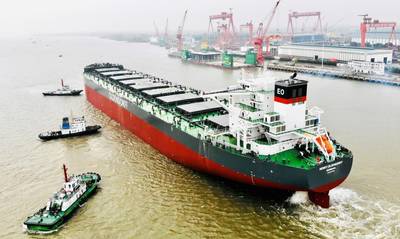 German shipowner Oldendorff Carriers said the first of its four Newcastlemax newbuilds on order at China's Hantong Shipyard was named on Monday. The new 208,000 dwt bulk carrier Henry Oldendorff is scheduled to be delivered on Thursday.

The newbuild, along with sister vessel Hugo Oldenodrff due to be handed over in the first quarter of 2021, have been sold to subsidiaries of ICBC Financial Leasing with five + five + two years bareboat charter back to Oldendorff Carriers on an index-linked floating rate basis.

Upon delivery of all four ships, Oldendorff will have built a total of 19 vessels at Hantong since 2019, including 12 Kamsarmaxes and seven Newcastlemaxes. Eight of these ships have been sold to third parties, six of those with floating bareboat charter back.

Oldendorff also has two 21,500 dwt specialized Transloaders under construction at Chengxi Shipyard for deployment under a 25 year coal transshipment contract in Vietnam. Calypso and Anna are scheduled to be delivered in December 2020/January 2021 and July/August 2021 respectively.