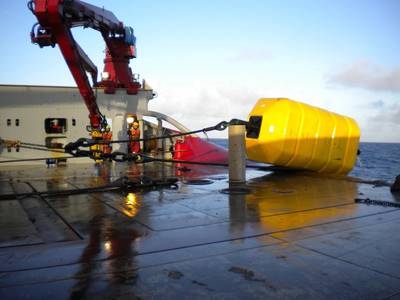 Deep Sea Mooring, which has already installed the pre-lay system, will supply mooring and pre-lay equipment; offshore personnel; mobilization and demobilization services; and operational planning for the Safe Zephyrus accommodation vessel in one of the world’s harshest offshore environments 175 kilometers offshore Norway. The vessel is scheduled to stay in the Ivar Aasen field until the end of January 2017 with an option to extend until June 2017. The mooring of the Maersk Interceptor is also in the same field.

In order to secure the Safe Zephyrus, 12 mooring lines have been pre-laid with the mooring configuration consisting of fiber rope inserts, subsurface buoyancy units, chains, wires, and GM Vryhof’s industry leading Stevpris MK6 anchors. The anchors provide holding power over 30% higher than that of any other existing drag anchor today. Det norske oljeselskap will also take advantage of Deep Sea Mooring’s radio-frequency identification (RFID) system that ensures the tracking and documentation of all delivered and certified equipment via hand-held devices.

The Ivar Aasen field (formerly the Draupne Field) is located in the northern part of the North Sea, west of the Johan Sverdrup field and 175 kilometers offshore Karmøy, Norway. Det norske oljeselskap operates the field which contains approximately 200 million barrels of oil equivalent.

Det norske oljeselskap is a leading Norwegian oil and gas exploration development company. The company recently agreed to merge its operations with the Norwegian subsidiary of BP in a move that will double the company’s size and add operated installations, such as Skarv, Ula and Valhall, to its current Alvheim and Ivar Aasen fields. The new company will be called Aker BP.

The vessel is equipped with a DP3 system and 12-point wire mooring arrangement for operations in harsh environments, providing maximum cost efficiency and flexibility. The open deck area is 1,000 square meters.