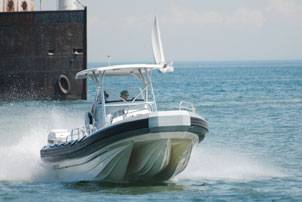 The tri-hulled ReflexTM 850 Spyder underwent assessment and evaluation trials on Lake Ontario off Port Credit and Burlington’s LaSalle Park by with federal provincial and municipal police marine units from July 20 to 23.

Completely designed locally and manufactured in Maine, U.S., the 28-ft craft comes to Canadian waters after considerable testing in the United States by various police agencies. The U.S. agencies expressed significant admiration for the vessel after comparing the ReflexTM tri-hulled speed and maneuvering prowess against their own traditional V-hulled patrol vessels, said RAM President and designer Ian Taylor.

Now in production after several years of development, the boat is slated to be tested by local units of the Royal Canadian Mounted Police, Ontario Provincial Police and GTA municipal police forces with marine units. Canada’s Coast Guard has also indicted interest in putting the twin-225 HP Evinrude powered Spyder through its paces for speed and maneuverability.

Though the RAM patented tri-hull design can be produced in various lengths for a myriad uses, including recreational craft, water taxis, patrol craft and fast ferries this particular KevlarTM hulled, Spyder craft is being marketed specifically to police, security and military agencies.

All designs were completed using 3D CAD and all the craft’s tooling was cut using multi-axis milling machines. All vessels are currently constructed under license to RAM in Maine, U.S.