Richard Balzano is the CEO of Dredging Contractors of America and a former U.S.... 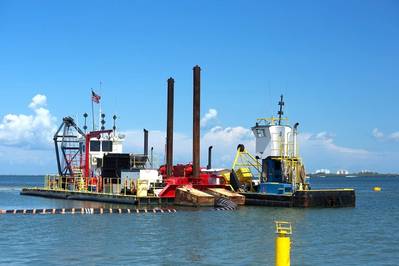 Congress recently made a major, if little noticed, new investment in American infrastructure. As part of the year-end budget deal, lawmakers released $10 billion that had been locked away in the Harbor Maintenance Tax Trust Fund to be used for its intended purpose: dredging U.S. harbors to keep our ports open and support U.S. economic and national security.

Maritime infrastructure is an indispensable national asset, which is why the U.S. Department of Homeland Security recognizes the Maritime Transportation System (MTS) as one of the seven critical subsectors within the transportation system. Disruptions in operations at America’s ports could torpedo our economy or even prevent the U.S. military, which moves nearly all of its equipment on ships, when deploying overseas.

The MTS accounts for slightly more than one-quarter of the total U.S. economy, equaling $5.4 trillion in total economic activity. The backbone of the sector is international freight transported to and from the U.S., with vessels moving nearly 42% of the value and just under 71% of the weight of U.S. international trade.

Anything that might prevent cargoes from moving freely in and out of U.S. ports would throw a wrench into the MTS and our economy. Challenges include landside congestion, cargo cranes out of commission, or disruptions to navigable waterways, such as erosion or silt deposits, that limit vessels' ability to reach port. That is why the dredging industry is essential, and why Congress’ unlocking of the Trust Fund, which lawmakers had previously restricted, makes sense.

The marine dredging industry keeps our waterways open and ships and our economy moving. Dredging is also the first consideration in port expansions, as the ever-expanding global supply chain demands increasingly larger vessels, which require deeper and wider ports.

Since 2018, dredging industry’s capital has delivered two new hopper dredging vessels and a 35% growth in volume dredging capacity, with three additional ships on the way as well as additional larger high-capacity Cutter Suction Dredges being delivered the industry will have historic never seen before levels of capacity. These dredging vessels are Jones Act-compliant, meaning they are built in the U.S. by American workers and owned and operated by American companies, which supports the broader U.S. maritime industry. All told, the marine dredging industry recently invested over two billion dollars in vessels and equipment for the future.

We have been reminded during the COVID pandemic that critical U.S. economic sectors, particularly the maritime industry, must remain organic and capable to meet our basic needs as a nation. Outsourcing comes with long-term pain, as allowing the U.S. maritime industrial base to move overseas would destroy tens of thousands of American jobs and leave the U.S. less capable of managing its own trade or deploying U.S. forces when needed. That is why fostering a growing U.S. maritime industry and preserving the Jones Act are essential economic and national security policies.

Thankfully, Congress has recognized the essential nature of the maritime industry and of dredging by opening up the Trust Fund for use. The importance of dredging to our economic and national security is why the U.S. government retains control of and funds 95% of all dredging services through the U.S. Army Corps of Engineers. The Corps knows it can rely on the capacity the marine dredging industrial base provides. It is a positive relationship that ensures that taxpayer dollars are invested wisely with companies that provide these services transparently and at competitive prices.

By reforming the Harbor Maintenance Tax Trust Fund, Congress unleashed billions to help keep cargoes moving, guard our security, and spur economic recovery. The U.S. dredging industry, thanks to its own private investments, is prepared to put these investments to good use, keeping the critical Maritime Transportation System open and operating. We’re proud of the role we play in keeping our economy growing and our nation secure.