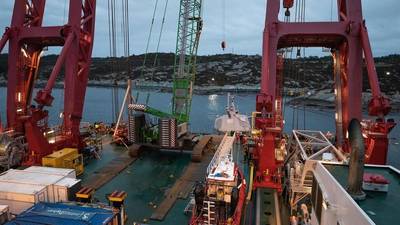 Parts of the frigate "Helge Ingstad" seen from one of the two barges. Photo by Bendik Skogli, Norwegian Armed Forces

The Norwegian frigate was involved in a collision with the oil tanker Sola TS just outside the coast northwest of Bergen in western Norway on November 8, 2018. Many operations have been made aiming to prevent the vessel from sinking.

The operation has been delayed many times due to weather conditions. In order for the operation to be conducted safely, wind and waves must be calm for the duration of the operartion.

"Forecasts indicate that the needed weather window occurs now – and the operation was initiated early morning Tuesday 26 February. During the first phase of the operation, most of the work will be conducted under water," said an official release from Norwegian Armed Forces.

Two barges have anchored up next to the frigate. Since the accident in November, divers and personnel have been working to pull several lifting chains around the hull. Four large hoists on the two barges will now slowly lift the frigate from the seabed.

The frigate will then be raised onto a sub-surface barge, which then will be raised to the surface. Aboard the barge, HNoMS "Helge Ingstad" will be shipped to Haakonsvern Naval Base, Bergen. If the operation goes according to plan, the ship may be at Haakonsvern some time during the weekend 1–3 March, the release said.