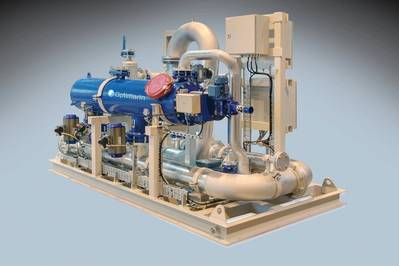 In the quarter of a century since its formation in 1994, ballast water treatment (BWT) specialist Optimarin has never experienced a year quite like 2018.

The Norwegian headquartered firm has revealed that the previous 12 months saw it sell more than 100 systems and achieve record revenues.

However, according to company CEO Tore Andersen, 2019 is already shaping up to set a new standard, with the orderbook currently five times the size it was at this point in 2018. Revenues, he says, are expected to double year-on-year.

Long-term dedication
“This is an overnight success that’s been 25 years in the making,” he says. “I’ve been asked how have we managed to suddenly boost sales in this way. But that ‘sudden’ surge is the result of many years of dedication, investment and total focus on BWT.

“We have patiently developed the market’s most reliable, simple and effective UV technology – a technology that is tried and tested like no other, with no major overhauls or iterations in the last ten years. That means we, and our customers, have complete trust in it, knowing the system inside out. It is easy to use, easy to operate and easy to rely on.

“Now that the industry is mandated to install BWT systems we see that it’s becoming the easy choice.”

Ambitious growth
With the most recent orders taken into account, Optimarin has now sold close to 700 of its Ballast Water Treatment Systems. Of these, more than 500 are installed and operational, of which approximately 250 are retrofits.

Stand out agreements in 2018 included signing a 36 system fleet deal with Ardmore, being selected for the USCG’s newbuild Offshore Patrol Cutter program, extending its relationship with Saga Shipholding, securing new installations with Royal Caribbean, and moving into the aquaculture segment with a contract for DESS Aquaculture newbuild wellboats.

2019 has already seen a host of new contracts signed, encouraging Andersen to aim for a 100% year-on-year sales increase for 2019.

Strong and stable
Optimarin, which installed the world’s first commercial BWT system on the cruise ship Regal Princess in 2000, is now expanding its own business to meet demand. In the past few weeks the firm has taken on new staff across its procurement, technical and project management divisions.