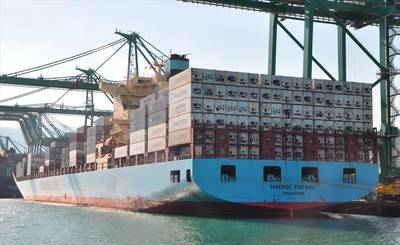 Helicopter and boat crews are scouring the Port of Savannah in search of a crewmember who fell overboard from a containership in the Georgia seaport on Tuesday.

The U.S. Coast Guard said its watchstanders at Sector Charleston were notified at approximately 3 a.m., Tuesday by Georgia Ports Authority that a 70-year-old man was missing from the Maersk Tukang.

The crewmember did not resurface after falling into the water from a gangway while boarding the Singapore-flagged ship, a Coast Guard spokesperson told MarineLink.

The Coast Guard said it has deployed a HH-65 Dolphin helicopter aircrew from Air Station Savannah and a 29-foot Response Boat-Small crew from Station Tybee Island to search for the missing man.

Crews from Department of Natural Resources, Savannah Fire and Rescue, Chatham County Sheriff's Office and Garden City Fire and Rescue are also participating in the search.