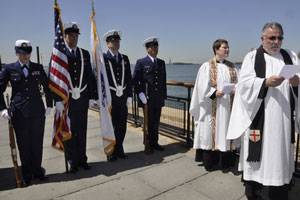 The Reverend Jacques Girard and Megan Sanders of the Seamen's Church Institute deliver an invocation of prayer while Coast Guard Sector New York's color guard maintain a silent vigil during a wreath-laying ceremony at the Mariner's Memorial in Battery Park, N.Y., honoring mariners who have perished at sea on Mariner's Day May 19, 2009.

The Merchant Marine is an organization of commercial fishermen who run tankers, cargo ships, barges, and other means of sea-going transport dedicated to the shipment of economic commodities and household goods throughout the world. The Merchant Marine Academy, based in King's Point, N.Y., serves as the training school for people who chose to serve as professional commercial mariners.